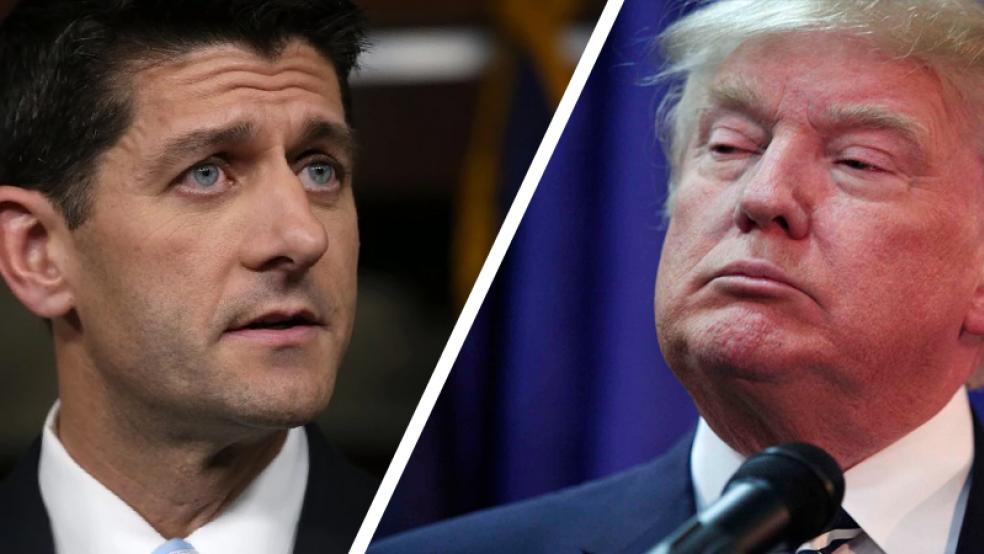 Paul Ryan, the top elected Republican, ended a long period of soul-searching and endorsed Donald Trump for president on Thursday, a step toward unifying party loyalists behind the insurgent candidate despite concerns about his candidacy.

Ryan had been a high-profile holdout to supporting Trump for the Nov. 8 presidential election out of concern about the presumptive Republican nominee’s bellicose rhetoric and break with party orthodoxy on issues including trade and immigration.

The House of Representatives speaker announced his support in a column for the Janesville Gazette newspaper in his home state of Wisconsin. It surfaced in the middle of a speech by Democratic front-runner Hillary Clinton in which she launched a far-reaching attack on Trump’s foreign policy credentials.

Ryan did not specifically use the word “endorse” in his column, but his spokesman, Brendan Buck, made clear that Ryan’s move should be seen as an endorsement.

The speaker had criticized the Republican candidate several times, including Trump’s proposal in December to temporarily ban all Muslims from entering the United States because of national security concerns.

The 46-year-old Ryan was the only member of the Republican congressional leadership who had not formally embraced Trump.

In a tweet, Trump responded: “So great to have the endorsement and support of Paul Ryan. We will both be working very hard to Make America Great Again!”

Ryan’s backing of Trump could give cover to more reluctant Republicans to get behind the billionaire businessman as their best chance to win the White House.

“I think the endorsement is significant because it shows the falling in line of the establishment Republicans from the top,” said Republican strategist Ron Bonjean.

It should also help Trump make the case that he can bring the party together as he girds for a Republican nominating convention in July that many party leaders plan to skip.

It also represents a blow to Republicans who have been trying to organize a third-party bid to give party loyalists who cannot abide Trump someone else to support. The “never Trump” crowd includes 2012 nominee Mitt Romney. Ryan was Romney’s vice presidential running mate.

While Ryan’s decision could push some Republican leaders off the fence, many holdouts remained, such as two former rivals, former Florida Governor Jeb Bush and U.S. Senator Lindsey Graham of South Carolina. Aides to both said their positions had not changed.

Ryan met Trump in a high-profile meeting last month and they have since had a number of telephone calls.

“It’s no secret that he and I have our differences. I won’t pretend otherwise,” Ryan wrote. “And when I feel the need to, I’ll continue to speak my mind. But the reality is, on the issues that make up our agenda, we have more common ground than disagreement.”

Ryan said he and Trump had spoken many times in recent weeks about how, “by focusing on issues that unite Republicans, we can work together to heal the fissures developed through the primary.”

“Through these conversations, I feel confident he would help us turn the ideas in this agenda into laws to help improve people’s lives. That’s why I’ll be voting for him this fall,” Ryan said.

Announcing he will vote for Trump should make it a bit more comfortable for Ryan to chair the party’s nominating convention in Cleveland.

While Ryan’s endorsement was significant for Trump, there remain many concerns about him within the party.

Longtime Republican financier Fred Malek drew attention to worries about Trump in a column in the Washington Post on Thursday. He cited Trump’s criticism last week of New Mexico’s Republican governor, Susana Martinez, considered a rising star in the party with the ability to appeal to Hispanics.

“These attacks on fellow Republicans must stop as we move closer to the general election,” Malek wrote.

Senate Majority Leader Mitch McConnell, a Kentucky Republican, who has said he will support Trump, told CNN that Trump’s proposed Muslim ban was a bad idea and that his criticism of Martinez was ill-advised.

Ryan said he too still had concerns about Trump’s tone.

“It is my hope the campaign improves its tone as we go forward and it’s all a campaign we can be proud of,” Ryan told the Associated Press.