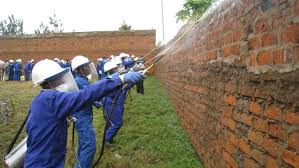 In a bid to reduce the cases of mortality caused by malaria in the country, the Rwanda Biomedical Centre (RBC), has recently launched a door-to-door indoor residual spraying in different districts.

The spraying will be done in the most malaria-prone districts of Bugesera, Gisagara, Gatsibo and Nyagatare, according to officials, and the exercise was organised to coincide with the rainy season, when the spread of mosquitoes is high.

The areas were chosen on the basis that they have the highest morbidity rate.

RBC officials were in Bugesera to mobilise residents to ensure their homes are sprayed and to encourage them to control malaria by destroying mosquito-breeding sites like stagnant water near homes.

The spraying, which began in all the districts on April 4, will be concluded on May 5, according to Emmanuel Hakizimana, the director of the vector unit at RBC.

Apollinaire Rugambagye, the Head of Kagoma 1 Village in Ntarama Sector in Bugesera, said they have been experiencing high incidences of malaria due to the bushes mainly on the banks of the nearby Nyabarongo marshland.

He said he was optimistic that, with the spraying, malaria cases will reduce, adding that they would take extra caution to ensure they clear bushes around homes to destroy mosquito breeding grounds.

Hakizimana added that the mosquitoes are more active and dangerous from dusk to dawn, calling for the need to use treated mosquito nets by all households.

Jean Baptiste Munyaneza, a spraying officer, called on households to always take out furniture, food, water and clothes before the spraying exercise to avoid side effects from the pesticide.

After the spraying, windows and doors are closed for about two hours without letting anyone enter, and then opened for 30 minutes before cleaning done, he advised.