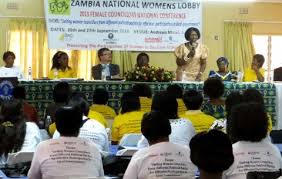 President Lungu has recently said that the participation of women in development was important and that he would remain committed to uplifting the welfare of the women regardless of their status.

He said the Patriotic Front (PF) was making headways in ensuring that more women were considered during the elections.

Government was making strides to fight child marriages and Gender Based Violence (GBV) and would embrace ideas from other stakeholders.

Earlier, Ms Hamweele said the women movement was excited with President Lungu’s stance to put women affairs on top of his agenda and urged him to continue with his efforts.

Mr Lungu said he would soon convene a meeting with the Electoral Commission of Zambia (ECZ) to discuss the issue of the referendum which NGOCC wanted to be held separate from the polling day.

He was responding to NGOCC director Engwase Mwale who asked him to consider holding the Referendum separately due to inadequate sensitisation to the majority of Zambians.

Mr Lungu said Government would also come up with stringent measures to regulate the ferrying of mealie-meal and that those found wanting would have their consignments forfeited to the State.

NGOCC board Chairperson Sara Longwe later made a number of submissions to the President that the organisation wanted Government to address among others, quick appointment and operationalisation of the Gender Equity and Equality Commission.

Meanwhile, President Lungu has authorised Mr Chikwanda to amend and issue and SI 103 that relates to the acquisition of goods for public benefits such as motor vehicles and other related items.

This would liberate refund in remission of tax for churches and Non-Governmental Organisation (NGOs) on importation of goods meant for public benefit.

Assistant for Press and Public Relations Amos Chanda said the SI 103 amendment was requested by the Church and NGOs regarding removal of waiver on goods and services used for public benefits.

The SI 103 would among other factors provide for stringent measures to ensure that those who abuse the waivers face sanctions.