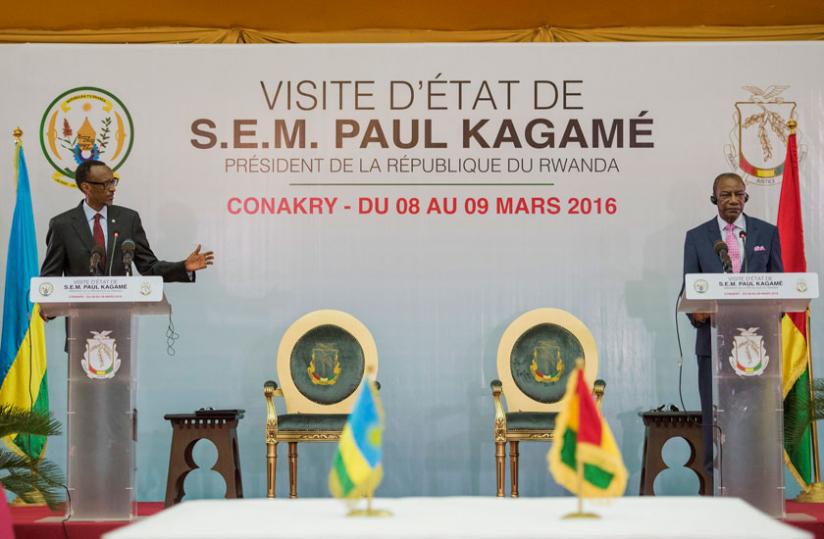 Rwanda and Guinea Conakry have recently signed a total of seven bilateral agreements meant to foster cooperation in different areas.
The agreements seek to remove visa requirements to all diplomatic and service passport holders, as well as issuance of visas to all ordinary passport holders upon arrival in both countries, according to a communiqué.
Also to be fostered is cooperation in the sectors of health and medical sciences, management of natural resources and air travel.
The pacts will also see the national carrier RwandAir add Conakry to its line of direct flights in Africa, a development expected to boost direct cooperation between the two countries in terms of business.
The signing of the agreements was witnessed yesterday by presidents Paul Kagame and his Guinea Conakry counterpart, Alpha Conde.
This was at the conclusion of President Kagame’s two-day State visit to the country.
Addressing a joint press conference, President Kagame reiterated Rwanda’s commitment in playing its part in ensuring all agreements come to fruition.
The President went on to thank Guinea for its leading role historically in independence movement, stating that “Independence of Africa is now irreversible.”
“We look forward to bringing together our African people to work towards the development Africa deserves. What remains is for us to work together for the better future and development of our continent.”
Earlier during bilateral talks, President Kagame extended an official invitation to Rwanda to his counterpart President Conde.
President Conde commended his guest, President Kagame on his relentless efforts in maintaining strong systems that enable sustainable development.
Upon his arrival on Tuesday, the President was hosted to a State banquet in his honor, during which he was awarded The Grand Croix, the highest honor that can be bestowed upon a person by the country.
As part of the his visit, both Presidents’ toured Conakry’s Port Autonome, or Autonomous Port of Conakry, one of Guinea’s State-owned companies responsible for the management of the capital’s port that brings in commercial vessels, mineral carriers and fishing vessels.
This was followed by a brief tour of one of Guinea’s Blueline facilities, whose main objective is to study the use of solar energy as a sustainable power source. The facility also doubles as a community centre for vulnerable youth.