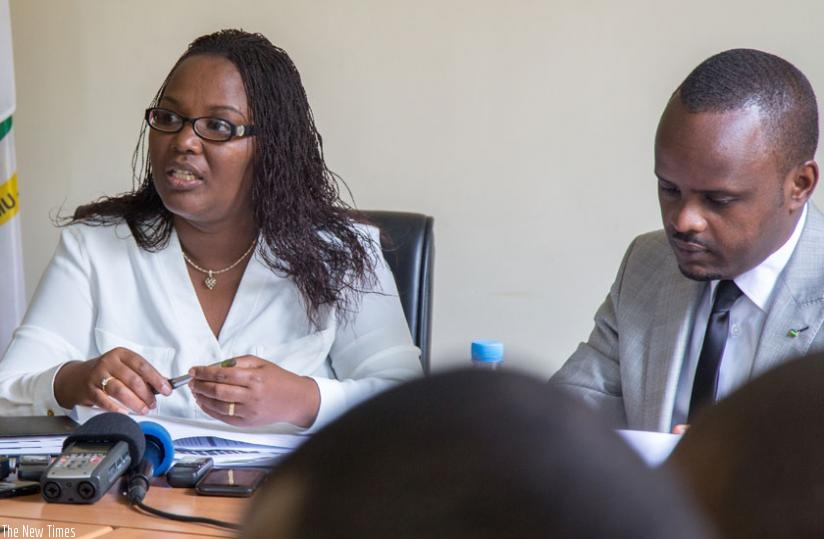 Climate change effects that manifested in some areas of the country during the year will not significantly affect the farm output expected in 2016’s agricultural season A.
Officials from the Ministry of Agriculture and Animal Resources explained the situation during a news conference on season A harvest and preparations for season B planting due mid-March.
“Despite climate change, the national food production situation in 2016 season A has not been significantly affected,” said Dr Geraldine Mukeshimana, minister for Agriculture and Animal resources during the press conference in Kigali.
According to the ministry, some climate and weather changes that posed challenges to the 2016 season A include late rains in many areas of the country, sub-optimal rains experienced in some parts of the country, such as sectors of Kayonza, Nyagatare and Kirehe districts and flooding in some low lying areas which led to poor productivity in affected areas.
For affected areas (some sectors in Kayonza, Nyagatare and Kirehe districts), MINAGRI helps them through the National Strategic Grain Reserve.
To reduce the quantity of the produce lost in post-harvest handling, Mukeshimana said the ministry is supporting farmers and cooperatives on improved post-harvest operations to reduce post-harvest losses and ensure quality.
“We conduct training and coaching sessions with farmers on post-harvest operations, but we also urge them to use existing facilities like drying grounds, dryers, warehouses to avoid losses,” she said, encouraging farmers to also use temporary sheds where permanent structures are not available or insufficient.
The ministry also facilitates farmers to acquire basic equipment like shellers, weighing scales, moisture meters and sheeting to facilitate proper post-harvest operations.
MINAGRI has 3,000 shellers which farmers can purchase while linking them to private equipment suppliers.
For agricultural season 2016A, 285,203 hectares of maize were planted while 908,723 metric tonnes are expected as yield- 406,698 hectares of beans were planted while 510168 metric tonnes of yield are expected.
At least 72,044 hectares of Irish potatoes were planted with 1,131,596 metric tonnes expected as yield while for soybeans 13,015 hectares were planted with expected yield of 152,63 metric tonnes.
Tony Nsanganira, the minister of state in the ministry urged farmers to shun selling produce to speculative traders who buy their produce at giveaway prices.
He said “some countries in the region are experiencing drought due to climate change effects. This can increase the demand as many people will need agriculture produce to be sold in those regions. This means that we are likely to have an increase in speculative traders. Our farmers should avoid such deals as we are promoting structured trade of produce so that farmers benefit from better prices.”
To cope with climate change effects, the ministry said it is promoting agriculture mechanisation and irrigation while varieties with short growth cycles are introduced to cope with protracted dry season and breeding of resistant varieties through Rwanda Agriculture Board (RAB) among other measures.