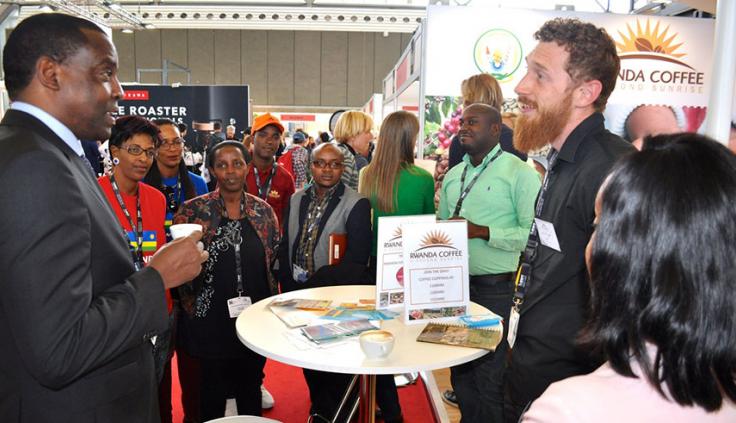 A Rwandan has opened a new coffee shop and roaster in South Portland, a city in Cumberland County, Maine, United States. This shop was founded by 32 year-old Mike Mweneta, a Rwandan who lives in the United States, according to the Rwandan Embassy in the USA, the new business – Rwanda Bean Coffee Company – launched in the presence of Linda Cohen, the Mayor of the City of South Portland, and Francis Bukuzagara, Second Counselor at the Embassy of Rwanda in the US.

Speaking to The New Times, Mwenedata stated that he developed the idea while studying business at University of Southern Maine.

“I was inspired while spending multiple hours in coffee shops doing my homework where I observed people spending $5 on a cup of coffee several times a day and that reminded me that particular amount can feed a whole family back home. I started wondering why coffee farmers are still struggling to provide for their families when Rwanda produces some of the best quality coffee in the world.”

Rwanda Bean Coffee which sells freshly brewed coffee, cold brew, and packaged coffee is described as a socially responsible business in that it sources directly from farmers, helping them to make the leap from subsistence farming to becoming skilled partners in the expert cultivation of Rwandan coffee.

Mwenedata told The New Times that after doing research, he realized that there is a big gap between the coffee community in Rwanda and consumers. “I call farmers shareholders in my business. They work very hard. I know what they are going through. The plan is to reinvest in infrastructure, education and healthcare to help the coffee community become more sustainable. Rwanda Bean Company is not your average profit oriented business. From the early planning stage of the venture, I pledged to reinvest 50 percent of my net profit back to farmers.”

At the launch, Bukuzagara, commended Mwenedata for having launched a successful business, and reminded those present that such initiatives are made possible because of the favorable business environment that the leadership of Rwanda has put in place.

“The State of Maine has the largest Rwandan Diaspora in the U.S. and I take this opportunity to thank the Mayor for providing them with opportunities that have seen people like Mr. Mwenedata grow into successful entrepreneurs and good citizens. With such attachment, a sister city relationship between South Portland and a city in Rwanda would be mutually beneficial, and we are open to discuss how we can further develop this initiative.”