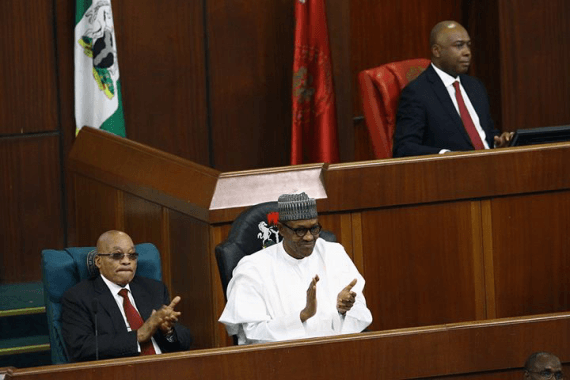 Jacob Zuma of South Africa has recently said his visit was significant for both countries to improve relations through benefiting business partnership to diversify economic sectors like agriculture, electricity and manufacturing, while addressing a joint session of Nigeria’s National Assembly in Abuja.
The joint session was presided over by Nigerian Senate President Bukola Saraki, with Nigerian President Muhammadu Buhari and the Nigerian House of Representatives Speaker, Yakubu Dogara, in attendance.
President Zuma stressed that the Economic cooperation between Nigeria and his country would serve as the bedrock of the continent’s economic cooperation and intra-Africa trade. He said his country and Nigeria must strive not to be left behind in the fourth technological revolution.
He noted that there was room for greater business engagements particularly in the areas Nigeria had identified as potential growth sectors. Such areas, he said, included electricity generation and supply, agriculture and agro-processing, tourism, mining, banking, infrastructure development, aviation, manufacturing and the automotive sector.
“We must strive for the diversification of our economies, so as to cast the net wide enough to create more job opportunities for our people, to improve their living conditions and grow our economies through domestic resources in the first instance.
“In doing this, we would break away from the colonial legacy that turned Africa into providers of primary commodities and recipients of processed goods.
“This is important because the current state of affairs makes Africa vulnerable to the volatilities of the international economy that sustains the uneven terms of trade.
“We must strive to bring the manufacturing plants closer to the sources of raw materials. South Africa and Nigeria can, to a large extent, complement each other towards the achievement of this,” he said.
Earlier, President Muhammadu Buhari and President Zuma in a meeting signed 30 bilateral agreements between the two countries. This showed commitment by both leaders to improve economic and trade ties and also strengthen relations between the Africa leading economies.
President Zuma lauded Nigeria’s role in the South Africa’s fight against apartheid and colonialism.
He recalled the various contributions of Nigerians in the struggle. “From the mid-70s‚ Nigeria and its people also hosted some of the exiled freedom fighters from South Africa‚ with numbers increasing after the Soweto Student Uprising in 1976‚” Zuma said.
“Nigeria supported the liberation struggles of the people of Southern Africa and South Africa specifically outside of the multilateral fora. It is thus clear that ours are time-tested relations.
“The people of Nigeria provided unwavering support and solidarity to the people of South Africa, to unseat the last bastion of colonialism in Africa and enable us to attain our freedom. I would like to remind especially the youth in our two countries, of the role that Nigeria played in the struggle for liberation in South Africa,” he said.
He also recalled that Nigeria established the Southern African Relief Fund in 1976 to provide scholarships and other assistance to South African students and refugees.
“More importantly, Nigerian civil servants had a “Mandela Tax” deducted directly from their monthly salaries to support our struggle for liberation. This was a real selfless contribution to the cause of freedom and an end to apartheid colonialism in South Africa,” he said.
He quoted former Head of State, late General Murtala Mohammed in his speech to the (Organisation of African Unity) Extraordinary Summit on Angola in 1976‚ said: ‘Africa has come of age.” and will “no longer accept dictates from any so-called superpower.’ ”
He said that South Africa and Nigeria were strategic partners in the pursuance of the African Agenda, South-South Cooperation and in the promotion of a rules-based International System. Both countries share a common vision on issues of political integration in Africa and on the need for a sustainable conflict resolution mechanism in Africa that is primarily driven by Africans.
President Zuma noted both nations share a common vision on the need for the reform of the multilateral institutions such as the United Nations particularly the UN Security Council, the IMF, the World Trade Organisation and the World Bank to be more reflective of the realities of the changing international environment.
He also called on both countries to continue advocating for rules-based international system and unite in order to achieve a more just and equal world.
Zuma concluded that South Africa and Nigeria’s experience in the peaceful settlement of disputes, peace building and peace keeping missions was of utmost importance for progress in Africa in general.
In a reconciliatory mode, President Buhari put to rest the perceived harsh regulatory actions imposed on some South African companies. He said the issues will be looked into, but he frowned at MTN’s in-actions to disconnect 5.2 million unregistered subscribers and decision to take NCC to court over $3.9m fine imposed on the telecom company.