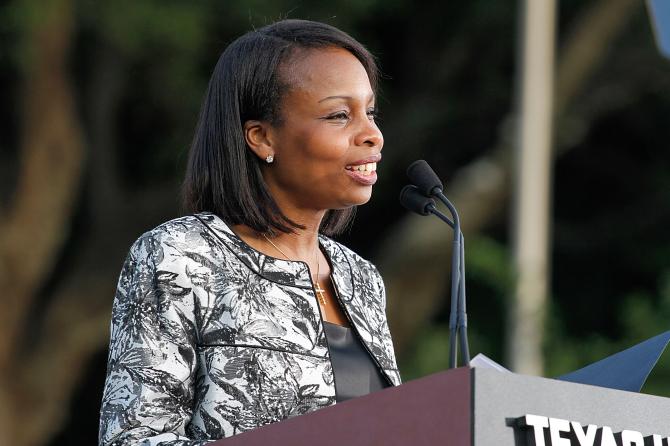 San Antonio Mayor-elect Ivy Taylor speaks onstage at the Texas Honors event to celebrate the History miniseries Texas Rising May 18, 2015, at the Alamo in San Antonio.

Voters in San Antonio have elected their first African-American mayor. Ivy Taylor, who was serving as interim mayor, won Saturday’s runoff with 52 percent of the vote, Reuters reports. It was a surprising victory against a popular Hispanic candidate in a Hispanic-majority city.

“The work starts on Monday at City Hall,” Taylor said, according to the Associated Press. “We come together now as a city.”

Her opponent, Leticia Van de Putte, would have been the city’s first elected Hispanic female mayor. She served in the state Legislature for more than two decades and appealed to working-class Hispanic voters. Van de Putte won the most votes in May out of a field of 14 candidates, but she failed to win more than 50 percent of the votes, which forced a runoff against Taylor.

Reuters says that Taylor put together “an unlikely coalition” of African-American and conservative white voters in her narrow victory. They represent the largest minority voting groups in the city.

“I will stand with you each and every day to make this a great American city,” Van de Putte told Taylor after conceding defeat, according to Reuters.

Taylor was serving on the San Antonio City Council last year when the council voted to appoint her to replace Mayor Julián Castro, who’s now secretary of the U.S. Department of Housing and Urban Development.