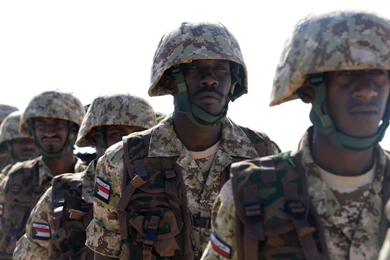 Saudi Arabia has recently granted five billion dollar military assistance to Sudan initially dedicated to the Lebanese army, multiple sources told Sudan Tribune on Monday.
The diversion of military aid to Sudan comes as the Saudi Press Agency announced on Friday 19 February the cancellation of a $3 billion aid package for the Lebanese army and the remainder of $1 billion in aid it had earmarked for Lebanon’s security service.
The military aid to Sudan was announced to President Omer al-Bashir by the Saudi Foreign Minister Adel al-Jubeir, during a two-hour visit to the Sudanese capital Khartoum, seemingly in return to his total political and military support to Saudi Arabia in the regional confrontation against Iran.
“The Kingdom of Saudi Arabia has diverted to Sudan its military aid to Lebanon,” the sources told Sudan Tribune.
“The Kingdom will give Sudan military assistance amounting to $ 5 billion for its army and other regular forces rather than Lebanon because they didn’t condemn the attack on the Saudi embassy in Tehran,” the sources further said.
Sudan Tribune was not able to get an official confirmation for this news from the Sudanese government officials who refused to comment when reached by Sudan Tribune.
It is not clear if Sudan will get the French weapons initially designed for the Lebanese army or will buy weapons from China and Russia, Sudan traditional weapon providers.
The Saudi gift will enhance military capacities of the Sudanese army as it is now member of a Saudi-led military regional alliance.