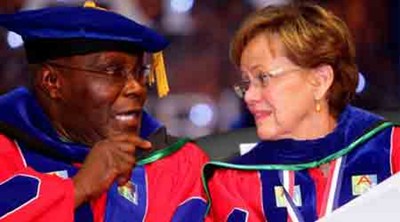 The American University of Nigeria (AUN) has recently offered free education to 200 vulnerable girls, orphans, internally displaced girls and those living on the streets with no access to education in Adamawa State.
President of AUN, Margee Ensign, disclosed this in Yola, Adamawa State capital, saying the 200 girls were captured under a new programme of AUN titled: ‘Feed and Read Programme for girls.’

Ensign stated that the Irish Government had provided the sponsorship for only 50 vulnerable girls but when the AUN went out to identify these categories of girls in Yola, they identified 200 girls and couldn’t send them back as directed by founder of the University and former Vice President, Atiku Abubakar, that no child should be returned.
She said the programme was a dream come true for her as the girl child had been at a disadvantage because of cultural belief, poverty and the onslaughts of the Boko Haram insurgency in the North-east region which had rendered many homeless and go without food for days not to talk of education when they cannot feed themselves.

According to her, following the AUN’s commitment to educate vulnerable children especially those on the streets across, it cannot watch children of the institution’s host community walking the streets without education. Also noting that if that was not done, the reason behind the establishment of AUN would be defeated because it was meant to be a development university and not just a normal degree-awarding institution.

“When a country educates its girls, everything in that country changes for the better, so all hands must be on deck to support the education of our girls,” she stated.

Also speaking regarding the programme, the Principal of AUN Academy, Nkem Uzowulu, who is in charge of the programme, said it was aimed at feeding disadvantaged girls, and in the process teach them.
According to her, the Irish government had asked the AUN to start with 50 girls if they can identify them “but we now have 200 girls”.
“Offering girls basic education is one sure way of giving them much greater power of enabling them to make genuine choices over the kind of lives they wish to lead,” she stated further.
She said like their boys counterparts, girls have the right to education and skill acquisition, the right to career choice and self actualisation, adding that the girls education was sacrosanct for national development.