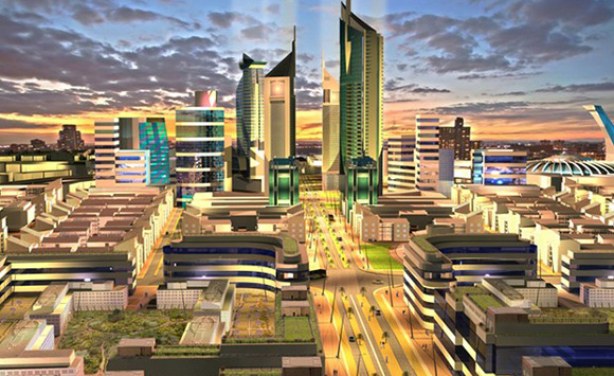 What if there were a city where big ideas become real, where traffic jams are obsolete, where women and men develop futuristic technologies together, where natural and urban ecosystems coexist in a high-tech hospital and a cheetah sanctuary, where rich and poor are lifted together? Dr. Catherine Nyaki Adeya says that city is being built, now, on the outskirts of Kenya’s capital of Nairobi – a metropolis known less for its many attributes than for gridlock and congestion and crime. The idea of Konza – spearheaded under former President Mwai Kibaki and developed by the administration of his successor, President Uhuru Kenyatta – can be seen as a kind of ‘do-over’, a city of the future built from scratch.

Adeya heads the Konza Technopolis Development Authority – KODTA – which over the next two decades aims to complete four phases of a new city for a new age in an ambitious public-private partnership. Major multinational companies have already signed on to the venture. If Konza succeeds, it will be a triumph in itself. But Konza’s larger value could be as a proving ground for bold experiments in humane social engineering that can be applied to existing cities where infrastructure is crumbling under the crush of rapid urbanization. For that to happen, Adeya may be in the right place at the right time. An information scientist, she has published widely on issues of inclusion and inequality in cities, including Nairobi.

At the moment, though, she is focused on this new, new thing – a visionary technocity etched into a grassland where wildlife and nomadic herders have roamed for generations. When AllAfrica caught up with her by phone, she was at a strategy consultation in Mombasa on Kenya’s coast, where government agencies have been scheduling meetings to help support hotels struggling to stay open amid a tourism downturn. Adeya’s colleagues say that her enthusiasm and optimism inspire them, and those qualities bubbled over the line as we talked.

The first thing is – Kenya is NOT trying to recreate Silicon Valley. People are talking about the “Silicon Savannah” and they think, “Oh, we’re trying to get a new Silicon Valley.” We are not; we’re trying to address a need that goes far beyond an ICT center. Kenya has been a natural hub for a lot of young technology startups that don’t go on to see the light of day. There are all of these brilliant ideas coming up. If you’ve heard of the iHub – all of these young kids flocking around Ngong Road and other places, they’re looking for a place where they can work together and where they can belong. They’re also to fix the existing system. The idea of Konza started as an ICT park. But it has become a great opportunity to go beyond that.

An example for Africa

The idea is a city where people can come and learn and work; where technology is used efficiently to address all issue areas – water, energy, housing, environment, health and healing, transportation, education. It should be an example for not only Kenya but for Africa. There are a lot of construction issues. The question is how we can have a productive environment where you can have people from related ecosystems together in the same place.

There are so many people who say they want to develop their products in Africa, but you have to have a place where they can take their ideas from craft to the product line – where they can have a lab and make the product efficient for the African market.

Let’s say, a university student comes up with a great product idea. He could go to an innovation lab where he could spend a half summer to develop and push the idea, and there would be the companies and government agencies to make sure this product, if it’s a good one, sees the light of day. There would be facilities and resources in place to take it to the next level.

Right now we don’t have that, because everyone is scattered everywhere. It’s a matter of chance whether people who could help get the chance to talk to and encourage these young people. Then there must be a way to export their products. Once you have the infrastructure built it becomes easier. Now it’s even hard to get products from Nairobi to the ports in Mombasa, so you’re losing access to both a regional and international market.

How will building Konza be different from any new city?

The concept is truly exciting, but you really don’t want to take shortcuts. It’s not about brick and mortar only – but brick and mortar needs to be executed to the highest standards of smart city building. That means taking so many concerns into account from the beginning. In Africa, in the world, we need to find solutions to urban problems in a hurry, because all our cities are growing rapidly. We need to find solutions very fast. Konza can model some of the new ideas – such as designing to encourage walking, bicycling, trams, electric cars. We should understand that we must find ways for what is designed and implemented in Konza to be applied to Nairobi and other existing cities, with the right kind of imagination.

We have a team of project managers to help – a consortium of companies led by Techno Tech Inc. of Denver Colorado. We are calling them our master development partners. They are going to help us make sure the development of Konza is smart and sustainable.

What are some of the elements that will make the city special?

A lot of the interest from investors has been in medical institutions. Imagine a modern hospital – or a long-term care facility – that that beautiful, serene environment alongside a natural animal migration corridor. Investors are looking to develop film. The film industry in Kenya is burgeoning. There’s interest from the Kenya Film Commission and from foreigners as well for production studios and specialities like animation. A part of Konza could be called Kollywood [following Hollywood in Los Angeles, Bollywood in Bangalore (India) and Nollywood in Nigeria].

Housing is huge – the opportunity to design and build eco- houses is too important too ignore, even though we need a lot of housing fast in Kenya. But we don’t want shortcuts to save money. So imagine having affordable but environmental housing, a research and development lab, innovative start-up businesses, large-scale call centers and other digital businesses that are possible because of our Internet infrastructure, high-quality health care, an advanced university.

One of the education buildings has been designed by SHoP Architectsof New York. They designed the Barclay’s Center in Brooklyn, New York where the Nets (professional basketball team) play. Sharp designed a very interesting roof that resembles the acacia tree, using the latest technology. One of the agreements SHoP made is that they have to work with the students in the university to teach some of the elements of architectural design. You’re teaching the next generation. The training is going to be throughout – capacity building in reality and not just on paper.

You’re a woman in a field that everywhere in the world is lacking in women at high levels. How has that been for you?

It’s been a bit difficult. Initially people doubted my ability. I had a choice between proving myself, or just getting the work done. I decided to focus on getting the work done. In getting the work done, I ended up proving myself! I got my Ph.D back in 1998. My undergraduate degree was in information sciences. I was a top student, but there were very few women. Even in a case where it’s evident that you’re excelling, people think that there must be a man somewhere helping you. There were times when I was interviewing for a job and they would interview male applicants for only thirty minutes and they would be interviewing me for two hours. Where the men were only taking one step, I always had to take two.

At the same time, I felt that there were always people opening opportunities to me. It’s interesting that those people were usually older men.

Now, some of us have been in the field for a long time and do not feel like we have to compete as we did initially. Some of us make our main initiative to make sure we are empowering more young women to join the IT field – and stay there. You see, some will enter, then find it a challenge to stay in the field because career progression can be an issue. Some of the problems that we had entering the field, they are still experiencing even ten years later. So you see now some young women in software who are forming their own groups. They create their own fellowships; they are not giving up. It is empowering.

One of the best things that has happened is that these networks are creating a platform that can allow us to engage with young women across the board, from professional women to women still in school. It’s something that gives us hope. I’m so glad that Safaricom [a leading mobile network company, whose innovations include the m-Pesa mobile money system] has set up something called “Women in Technology”. Some of the girls are in high school; some are in university. They help them network and we mentor them. The environment has really changed. It’s good to be a woman in IT in Kenya right now.

So you believe Konza will be pioneering and will succeed.

I do! The kinds of opportunities that Konza can offer, by being a natural hub, will draw people and investors here. This time, I truly believe, ‘if you build it, they will come’. The people who keep me engaged daily are the many young people who do not have money or jobs or opportunities now. We want to build what they need in Konza. The opportunities are there.