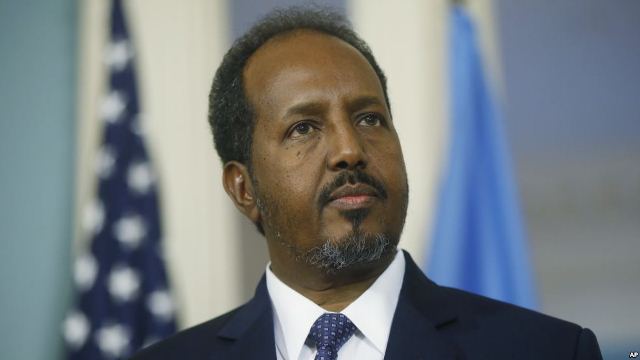 Mohamud spoke one-on-one with VOA Somali chief Abdirahman Yabarow in Mogadishu, after taking questions from Somalis in a VOA-sponsored town-hall meeting Saturday. The program was the first of its kind to connect Mogadishu, the capital of Somalia, with St. Paul, Minnesota — home to the largest Somali community in the United States.

The president said the Somali diaspora is responsible for many of the new businesses that have taken root in the Somali capital since al-Shabab lost its hold on the city in 2011.

Mohamud said he was encouraged during the meeting to see young Somalis expressing interest in rebuilding the country, which had been ravaged by a quarter-century of violence, recurring drought and widespread lawlessness.

“I was very much astonished to see the level of willingness — the level of hope — that those young people in Minneapolis have and how they love this country and how they’re committed to come back,” he said. “We used to say only the old people are the ones who are willing to come back, but now we’re seeing the young generation, as well, is willing.”

Regarding security and the attacks within the country by al-Shabab, including the August 30 truck bomb in Mogadishu that killed more than 20 people, Mohamud said Somali security forces need to adjust to the militants’ changing techniques.

“Before, … they came into the state house, they got into the parliament, into the courthouse, into different hotels,” Mohamud said. “Now … this has been reduced, and we’re experienced. They can’t go in anymore. Now what they do is they make a truckload of explosives. … It’s a new phenomenon to demolish the city. It’s not now killing people, going into hotels and government offices and killing people inside them. Now, it’s another technique. I’m sure the security forces will address this as they addressed the attacks that used to happen in the past.”

Mohamud, who has been president of Somalia since 2012, faces re-election later this year in a vote by parliament.