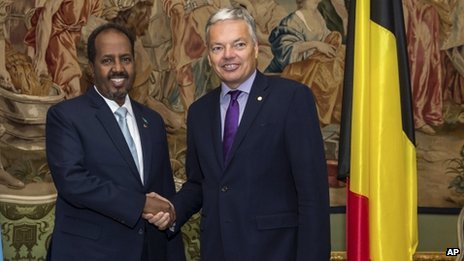 The European Union has pledged 650m euro ($860m; £540m) at a conference in Brussels to help Somalia end more than two decades of conflict.

The money is part of a “New Deal” for what is widely regarded as a failed state, officials said.

Al-Shabab is fighting to oust Somali President Hassan Sheikh Mohamud’s government, the first to be recognised by the US in more than 20 years.

The group controls most of southern Somalia, but it has been driven out of the main cities and towns, including the capital Mogadishu, by an African Union (AU) force backing the government.

The EU and Somali government believe now is a good time to adopt the programme as the country has entered a new era, with a more legitimate government and progress on the security front, our correspondent says.

Somalia is a good test case for the New Deal. It certainly fits the criteria for a fragile state, given that for six years in a row it has come top of the list of the world’s most failed states.

The New Deal focuses on peace and state-building. Without these, goes the argument, there can be no meaningful development, and aid money simply goes to waste. This has certainly been the case in Somalia, where billions of dollars have been thrown at a problem that refuses to go away.

The EU and Somalia argue that now is a good time to adopt the New Deal. They say the country has entered a new era, with a more legitimate government and progress on the security front.

But it is possible that the Brussels meeting will simply be the latest in the long list of expensive conferences on Somalia that end with ambitious communiques but have little or no impact on the development of the country.

“It’s a standard deal throughout the world in the post-conflict environment. This is a deal that is based on Somalia-led initiatives,” he said.

EU Commission President Jose Manuel Barroso said the extra money would support a “new phase in the life of Somalia”.

Separately, the UK said it would contribute $80m to the New Deal.

The money would go towards improving health and water services and rebuilding infrastructure destroyed by war, it said.

Diplomats were hoping to see more than $1bn (£600,000) in pledges to help rebuild Somalia, widely regarded as a failed state, it reports.

“Our combined efforts will maintain momentum and deliver the change that the people of Somalia desperately need,” Mr Wigan is quoted as saying.

Al-Shabab said it expected donor pledges would remain mostly unfulfilled or the money would be lost in corruption.

Mr Mohamud said at a news conference that aid money had been used to save lives, and provide basic services to Somalis.

The New Deal would take Somalia from an “emergency to recovery” over the next three years, he said.

“This is a new chapter. Today we are ending a journey and starting a new one,” Mr Mohamud added.

Most of the money was used to finance the AU force of some 18,000 troops, it reports.

Our correspondent says billions of dollars have been thrown at a problem that refuses to go away.

There have been several international conferences to help Somalia rebuild itself, including one hosted by UK Prime Minister David Cameron in May.

The UK and other donors pledged some $130m in aid for Somalia at the time.

Earlier this month, Somalia’s government said international investigators it had appointed had cleared it of corruption allegations made by United Nations monitors.

In July, the UN Monitoring Group on Somalia said Somalia’s central bank had become a “slush fund” for political leaders and that the current governor played a central role in irregularities surrounding unaccountable disbursements of cash.