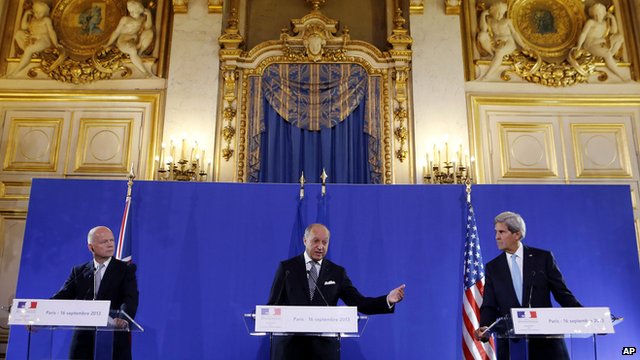 France, Britain and the US will seek a “strong” UN resolution with “serious consequences” if Syria fails to hand over its chemical weapons, says French Foreign Minister Laurent Fabius.

But Russia has warned that threatening Syria may “wreck” the peace talks.

Under a deal brokered by Russia and the US, Syria has agreed to disclose its full chemical arms arsenal within a week and eliminate it by mid-2014.

The US had threatened military action over a chemical attack in Damascus.

Syrian President Bashar al-Assad’s government denies allegations it was behind the attack on 21 August, which killed hundreds, and has accused the rebels of carrying it out.

UN weapons inspectors who visited the scene of the attack are due to release their findings later on Monday, though their remit does not involve assigning blame.

Meanwhile, the latest report from UN human rights investigators in Geneva said there was evidence chemical weapons had been used on several other occasions.

War crimes, including mass executions, rape and torture, were also continuing, according to the study.

The investigators said a referral to the International Criminal Court was imperative.

They agreed there had to be a “precise timetable” for the dismantling of weapons in Syria.

The UN Security Council is expected to draft a resolution for the Syrian deal in the coming days.

Meanwhile Mr Kerry said the resolution had to be “forceful, accountable, transparent and timely”.

“If the Assad regime believes that this is not enforceable and we are not serious, they will play games,” he told reporters in Paris.

“It is significant that three permanent of the Security Council are standing here together joined in unity, purpose and understanding of what needs to be done.”

Mr Kerry added that all the countries involved, including Russia, had agreed that military intervention could be an option “should diplomacy fail”.

“The framework fully commits the United States and Russia to impose measures under Chapter 7 of the UN charter in the event of non-compliance.”

Chapter 7 permits military action if other measures do not succeed.

But Russian Foreign Minister Sergei Lavrov said any calls for swift UN action against Mr Assad showed a “lack of understanding” of the chemical weapons deal reached with Syria.

Syria agreed last week to join the global Chemical Weapons Convention, which outlaws the production and use of the weapons. It will come under the treaty from 14 October, the UN announced.

The framework deal was announced on Saturday after three days of talks in Geneva between Mr Kerry and Russian Foreign Minister Sergei Lavrov.

Syrian Reconciliation Minister Ali Haidar welcomed the agreement, calling it a “victory for Syria achieved thanks to our Russian friends”.

More than 100,000 people have died since the uprising against President Assad began in 2011.

Millions of Syrians have fled the country, mostly to neighbouring nations and millions more have been internally displaced within Syria.