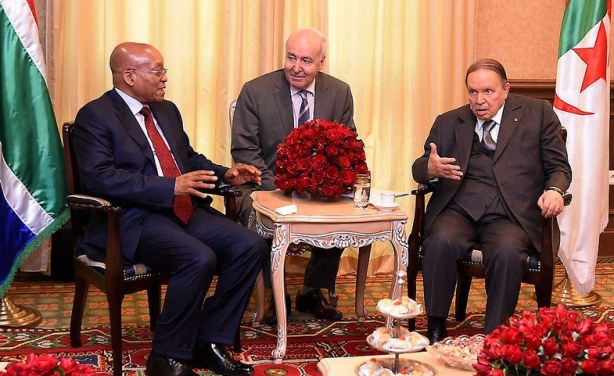 Speaking during the 6th Algerian-South African High Bilateral Commission of Cooperation, Lamamra said that the two countries “ambition to build a strategic partnership at the level of their aspirations of their two peoples.”

Stressing the “excellent” level of the political relations between the two countries, united by history and common values, Algerian FM said that Algeria and South Africa are “well endowed” with human and natural resources, to move together towards a “prosperous future.”

Lamamra explained that the works of the 6th Algerian-South African High Bilateral Commission of Cooperation, coinciding with the State visit paid by President Jacob Zuma to Algeria, represents an opportunity to identify the means to boost the bilateral cooperation, notably the economic field.

The minister said that one-to-one meetings will bring together Algerian ministers of commerce, industry, post and information and communication technologies, agriculture and housing with their South African counterparts.

Those meetings will aim at defining concrete projects likely to contribute to building the so wanted strategic partnership.

As for her, South African Minister for Foreign Affairs and Cooperation expressed her country’s readiness to strengthen cooperation with Algeria in various sectors.

Mashabane said that the existing agreements between the two countries needed to be implemented and revitalized in order to make them more profitable.

For South African foreign minister, the economic and cultural relations between her country and Algeria must be at the same level as their political relations, which are “very advanced,” she recommended.