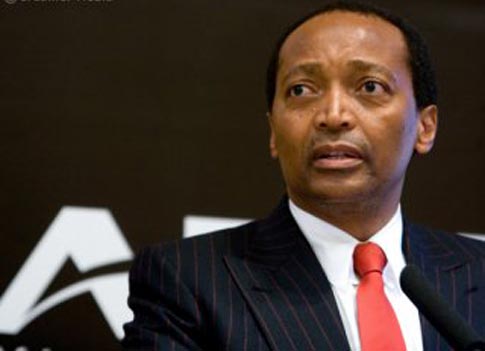 South African billionaire Patrice Motsepe has added over R8bn ($742 million) to his $2.7 billion fortune after his R200m ($19 million) investment in Sanlam’s Ubuntu-Botho BEE deal in 2004 recently matured, adding a return of 45 percent per year for the last 10 years.

The Ubuntu-Botho Black Economic Empowerment (BEE) deal, which came to the end of its 10-year contractual period on 31 December 2013, created value of approximately R15 billion (after debts and interests had been fully settled) from an initial investment of R1.3 billion, making the transaction between Sanlam and Ubunthu-Botho the most successful of its kind in South African history.

“Since the deal was set up, Sanlam’s tight strategy and strong financial performance has seen the Group’s share price rise from R7.65 in 2004 to around R52 today,” said Dr Johan van Zyl, Sanlam Group Chief Executive.

He added that the company “strongly outperformed its peers to deliver consistently strong results which allowed the deal’s value to flourish.”

He lauded Ubuntu-Botho Investments’ contribution towards the performance, noting that it has helped the company remain competitive, “attract and retain employees of the highest calibre and penetrate new parts of the market”.

While starting the project in 2004, Van Zyl and Motsepe personally visited all the nine provinces in South Africa to engage with the various broad-based shareholders, including trade unions (SADTU and NEHAWU), religious groups, entrepreneurs, small and micro business owners, women and youth groups all who would become the beneficiaries of the deal.

Broad-based groups made R3.6 billion from their 25 percent stake in the deal, while the Community Development Trust made R3 billion from its 20 percent.

Chairman of Ubuntu-Botho Investments, Motsepe, who was excited with the success of the deal, reiterated the need for people to be convinced about the benefits of having a successful black middle class and black entrepreneurs.

“We must encourage more black people to start, run and own their own businesses. Our hope is that as many of our beneficiaries as possible will not sell their shares in Ubuntu-Botho but will remain invested to get the long-term benefits of our new partnership with Sanlam,” Motsepe said.

The success recorded in the transaction has encouraged Sanlam and Ubuntu-Botho to renew talks on creating new opportunities for continuing the success of the partnership and ensuring that as many South Africans as possible benefit from it. Details are expected to be announced before the end of 2014.

“Our objective was always to form a long term partnership with Sanlam which would benefit all our stakeholders and make a contribution to the development and growth of our economy,” said Motsepe.