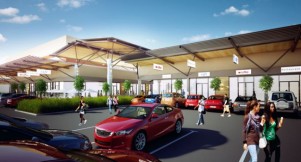 South African real estate firms are looking for opportunities to build malls in other African countries as the shopping center construction market back home slows down in tandem with a struggling economy that has barely managed to maintain a positive growth in recent years in the face of tough challenges.

The Africa’s second largest economy has the highest concentration of malls on the continent and is ranked among the ten top countries in the world with the most number of shopping malls as well as total floor space.

As at October 2014, there were 1 785 in South Africa, with 44 percent of the shopping centre space being in Gauteng.