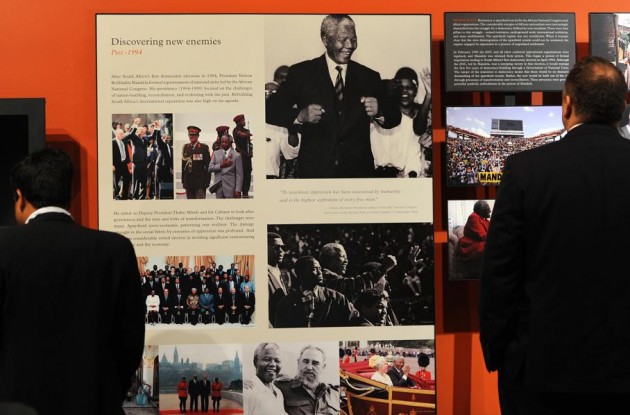 South Africa’s President Jacob Zuma has opened an exhibition about the life of the country’s first black leader, Nelson Mandela, in Johannesburg.

Mr Mandela’s Nobel Peace Prize, presidential briefcase and handwritten notes are among the items on display at the Nelson Mandela Centre of Memory.  Mr Zuma earlier visited Mr Mandela, 95, at his Johannesburg home, where he is receiving intensive care.

He remains in a stable but critical condition, the presidency said. The statement was issued after Mr Mandela’s ex-wife Winnie Madikizela-Mandela said he was unable to speak but used facial expressions to communicate.

Mr Mandela was no longer talking “because of all the tubes that are in his mouth to clear [fluid from] the lungs”, Ms Madikizela-Mandela told South Africa’s Sunday Independent newspaper.

Mr Mandela was continuing to respond to treatment, the presidency said in a statement.  In September Mr Mandela returned to his home in the suburb of Houghton, near the new exhibition, after nearly three months in hospital with a recurring lung infection.

Mr Mandela won the Nobel Peace Prize laureate in 1993 for leading the fight against white minority rule and preaching reconciliation with the white community despite being imprisoned for 27 years.  He became South Africa’s first black president in 1994 and stepped down five years later.

Nelson Mandela Foundation CEO Sello Hatang told the BBC the exhibition was not huge, but it had a “human touch” to it and showed that Mr Mandela was not “just a political being”.  The display includes a small piece of stone from the hut where Mr Mandela was born in the rural village of Mvezo in South Africa’s Eastern Cape province.  The stone was “one of the few things that’s tangible, that links us to Madiba’s [Mr Mandela’s clan name] early life,” Razia Saleh, a senior archivist at the foundation, told the Associated Press (AP) news agency.

“There isn’t much that survived from his early childhood. There’s no photograph. We don’t have a birth certificate,” said Ms Saleh.

The exhibition is the latest initiative by South Africans to honour Mr Mandela, who is revered as the father of the nation.  His home in Johannesburg’s Soweto township, where he lived before his arrest in 1962, was declared a National Heritage Site in 1999.