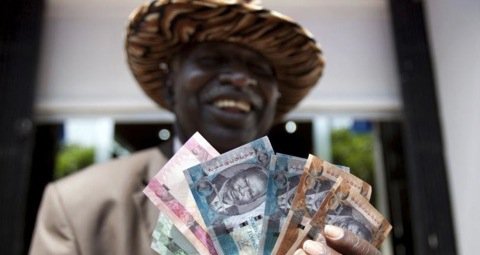 South Sudan has recently introduced new bank notes to deal with the confusion caused by some denominations whose notes look alike, a senior official has said.
Albino Dak Othow, the bank’s director of banking operations and currency said the new South Sudanese Pounds notes introduced were in denominations of 10, 20 and 100. The one pound note would now be produced in coins.
“We need to inform the public at large that the Bank of South Sudan will put in circulation a new bank note series bearing some slight changes. There is need for the public to be aware about it,” he said.
Othow said the features on the new notes will remain the same with the exception of the colours and signature. He said the colours had changed because the 10 pound note was similar to the 100 pound note.
“Some people were confused about the similarities in the 10 and 100 pound notes. In fact some people have been paying 100 South Sudan pounds thinking it is 10 South Sudan pounds,” he said.
The new notes also feature current central bank governor Kornelio Koriom Mayik’s signature while the old ones have that of his late predecessor Elija Malok Aleng.
Othow said the new notes will be used alongside the old ones as the old notes would be gradually phased out. “Do not panic. The value of the money remains the same. The 10 pound has nothing that has changed except that the colour is now green,” he said.
South Sudan introduced its own currency in August 2011 after seceding from Sudan the same year.