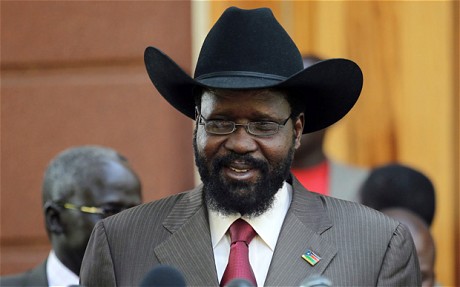 South Sudanese president, Salva Kiir, has completed consultations with the stakeholders on the August 2015 peace agreement and ready to form a transitional government. He is however waiting for a list of cabinet nominees of the armed opposition faction of the Sudan People’s Liberation Movement (SPLM-IO) led by the newly appointed First Vice President, Riek Machar.
Daniel Awet Akot, former deputy speaker of South Sudan parliament and a leading party official said on Wednesday that the leadership at all levels has completed consultations and gave names of identified officials to be appointed as ministers in the Transitional Government of National Unity (TGoNU).
He however said President Kiir was still waiting for the name so the SPLM-IO officials to be appointed to their quota of 10 ministerial positions.
“The leadership has completed consultations and preparations for forming the transitional government of national unity. The names of the comrades which the party has identified have been approved. The president is now waiting for the return of first vice president to be sworn in so that they complete consultation and form the government,” said Akot.
Akot, who is a member of the ruling SPLM Political Bureau (PB), further told Sudan Tribune that president Kiir has completed consultation with the other political parties and members of former detainees as well as leaders of the civil society, church based groups and opinion leaders in the country.
“There is nothing which is left to form the government except the absence of Riek Machar and the list of the people who would like to be appointed in the government from his group,” he said.
“It is now Riek who is delaying the formation of the government. It is not the government anymore. This must [be] clear to our people and the international community,” he added.
Other reports however said the President was planning to form a half cabinet on Friday without the opposition officials in the cabinet.
However, officials of the SPLM-IO said it was important to implement the security arrangements first in Juba as stipulated in the peace agreement, adding that it was for confidence building measures.
The chief negotiator for SPLM-IO, Taban Deng Gai, said their units of security forces must first arrive in Juba before their leader, Riek Machar, can travel to Juba to form a unity government with President Kiir.
He said it was important that the 2,910 opposition forces which will compose 1,500 police units arrive in Juba.
“It is very important new elements of police come to Juba because this is confidence building,” said Deng, the former governor of Unity state.
“If you are talking about the IDPs [Internally Displaced Persons] to come out of protection site; how will they come out? They have to come out if they know that they are fully secure, they are confident of the security arrangements put in place, because coming out is not [an] order,” he said.
Deng made the remarks after meeting members of civil society alliance on Tuesday. The activists had sought explanation from the opposition group about the delay for first vice president, Machar, to arrive in Juba.