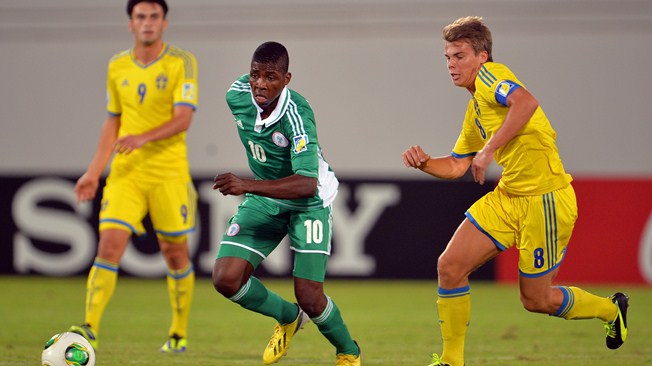 Just like the multiracial French team that won the World Cup in 1998, the Swedish team facing the Golden Eaglets today is akin to the “United Nations.” The Swedish team of 21 is made up of boys of 11 nationalities.

Some of the players’ roots can be trace to Africa and the far East Asia. In fact, of the 11 goals that Sweden had scored in the tournament, seven of them are from the ‘foreign legion.’ Those goals by players of other nationalities are the crucial ones that had put Sweden in the semi-finals. The anchor man of the Swedish attack, who had scored four goals so far in the tournament is Valmir Berisha. He is of Albania origin before he moved with his family to Sweden, when he was just two years old.

“Swedish players are known for being strong and fast,” Berisha told FIFA.com. “But when you throw in the technical ability of the guys like me from the Balkans and the good stuff the African guys bring too, the power and technique, we become more than just one threat.” Another player of Albania origin playing for Sweden is Gentrit Citaku. Erdal Rakip hails from Turkey.  His goal against Honduras sent Sweden into the semi final duel with Nigeria.

Owning to the almost extreme cold weather in Sweden, a Scandinavian country, the nationals are always very white and often blonde haired.  Take a look at the striker with jersey number 20, Carlos Stranberg. He is a deviation. He is tall and dark skinned and comes on as a substitute. Hear what he told FIFA.com: “My mother’s from Portugal with roots in Mozambique.”  The combination of his cultural combo-name is explained by him: “My dad, he’s Swedish, so there’s the Strandberg.

He combines well with Anton Saletros, son of a Hungarian immigrant, on the winning goal against Honduras. It was scored by none other than the sensational Berisha, who celebrated like a madman. In the first game Sweden played with Nigeria, Isak Ssewankambo featured before he was taken off after 15 minutes owning to injury. He is from Uganda. He is a teammate of Nigeria’s Habib Makanjuola in the Chelsea youth team in London. Sweden’s defence is marshalled by Noah Sonko, a tall centre-back who is from the Gambia.

Sweden has identical twin brothers in their fold Sebastian and Johan Ramhorn.  Their mother is a Korean.  Ali Suljic and speedy winger, Mirza Halvadzic came from Bosnia. Both were scorers in the games between their team with Iraq and Nigeria. Another player, Christer Lipovac hails from Croatia. Goalkeeper Sixten Mohlin’s blood flows from the Netherlands and the Cape Verde Islands, off the North-western coast of Africa. According to FIFA, even the team’s medical staff is of Italian ancestry.