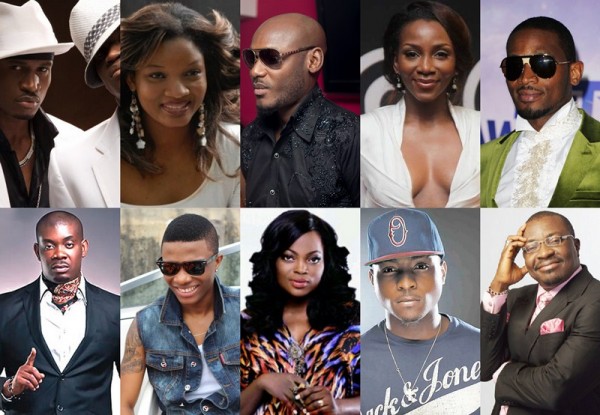 With diversity, innovation and hard work in the Nigerian entertainment industry, several celebrities and personalities are smiling to the bank with bags full of money. Whether through endorsements, family money or investments, these following individuals are ranked from the highest visible to the least high moneybags in the industry. This analysis by ADERIBIGBE TOLULOPE takes into consideration the artistes’ investments, assets and endorsements over the years all over Nigeria and even outside the country.

Here is a list of 10 richest entertainers in Nigeria comprehensively made by LEADERSHIP:

The twin pop sensation, Peter and Paul Okoye are undoubtedly reckoned the richest artistes in Nigeria due to investments and endorsements as a group. The duo has invested widely and their assets are running into billions of naira in and outside the country. P-Square’s deal with GLO is said to be N140 million. P Square’s notable investments include a home in San Francisco, USA with an estimated cost of N434 million ($2.89million), a private jet, a mansion in Lagos worth N400m. The twin brothers who are from Anambra State have landed properties in Jos and Port Harcourt, they own Rayfield Hotel, Jos and two multi-million naira factories also in Jos.

The bulk of their earnings comes from concerts, endorsements and CD sales. They are said to have sold above 14 million copies of their CDs since 2005. They won the KORA award for Best Africa Artiste in 2010 with the sum of $1m. They charge about N4m per show and in 2011, they signed a multimillion naira deal with Akon Konvict Music. They have in their garage, two SUVs, one hummer SUV, truck bus, among other cars worth millions of naira.

He was born Innocent Ujah Idibia from Benue State. A former member of Plantashun Boyz and lead vocalist of the group, he is the highest in ranking as an individual. Tu Baba with three platinum records already behind him is estimated to be worth over 600 million naira ($3.47 million). He has had endorsement deals from companies such as Guinness, which earned him N20 million ($125,000) and Airtel, which earned him N22 million. He was also rumoured to have collected N30 million ($189,000) from the producers of the Phat Girls movie. Tuface has invested heavily in real estate and stocks, and made big money from these. He once said his goal was to recover all the wealth taken from Africa. His clubs, Rumors, in Festac Town and GRA, Ikeja are both worth over 400 million naira.

The popular Nollywood actress and singer is representing or has represented brands like Lux. She bought a luxurious home in highbrow estate, Parkview Estate, Ikoyi which was estimated to be worth N220 million ($2.2million) in 2013. Cintrion Energy drink raked in N50 million for the actress. Etisalat deal acquired N100 million ($10 million) for her. Then her Polo contract was estimated 70 million naira, and Amstel Malta signed her as its ambassador in March with the deal worth millions of naira. In 2010, she was appointed the Face of MUD in Nigeria. The actress recently acquired a 2013 Mercedes Benz G Wagon said to cost N40 million; in 2012, she signed a deal with Coscharis Motors, sole dealers of BMW and Landrover in Nigeria worth $100m as the face of Range Rover Sport, then later Evogue with a renewed deal.

He was born Dapo Daniel Oyebanjo. Apart from music, D’banj has moved into other sectors. His interests include Koko Mansion, a TV reality show, Koko Lounge, an upscale hangout in Lagos and the UK, Koko Foundation, a charity, Koko Farms that makes Koko garri and Koko Mobile. The entertainer’s endorsement deal with Globacom telecommunications is worth N70 million ($442,000). He has a multi-million naira endorsement with energy drink, Power Fist, a deal with the makers of the Virgin Colour soft drink and another huge deal with a popular jeweller. Another of his endorsement that runs into millions is with Chris Aire, with D’banj acting as the face of its watches. He collects between N5 million ($31,500) and N7 million ($44,200) as performance fee for local gigs, and even bigger fees across Africa and in the US and UK. Like his old boss, Don Jazzy, D’banj also bagged a recording deal with Kanye West’s

G.O.O.D Music. He has a number of choice cars in his garage, including a N32 million Aston Martin Vantage. He has a multimillion naira deal with UAC Foods. His endorsement deal with Globacom telecommunications earned him N70m.

Real name Michael Collins Enebeli is the CEO of Mavin records which he founded in 2012 after his split with his Mo’Hits partner, Dbanj. He is one of the most sought after producers in Nigeria. As a child he was a member of Good Morning Kids, a group created by his father. He is known for his business dexterity, building Mo’Hits from scratch to become one of the biggest entertainment empires in the country. He recently signed a recording deal with Kanye West, a move that not only boosted his reputation as an entertainer, but also his wealth. According to a report, Don Jazzy has a black Cadillac Escalade worth N12 million, a black Bentley Continental Flying Spur worth N29.6 million, a black Range Rover Sports worth N9.6 million ($95,000) and he has a Porsche 911 Carrera worth over N13 million. The Dorobucci pioneer got paid N50 million from Loya Milk. He also has a N25 million deal from MTN. He also acquired a house worth over 100 million in NICON estate in Lagos.

David Adeleke has a N140 million house in Lekki, Nigeria.

According to a report, he wears a luxurious necklace from Ice Box Jewellers called Jesus Piece which is worth over N3 million ($20,000).

He also wears a diamond-encrusted Rolex wrist watch worth over $25,000 (3.7 million). Cars in his garage include a 2012 Audi Q7, a 2012 Silver Honda Accord, a N6m Chevrolet Camaro and a 2012 model Hyundai Sonata and a Mercedes G55 AMG worth about N30m. He deals with MTN Pulse, the deal is reported to be worth N30 million, while his Guinness endorsement hasn’t been made public. Recently on one of his social media pages, he revealed he had taken delivery of a private jet.

Olubankole Wellington makes the bulk of his wealth from gigs, where he charges between 2.5 million naira ($15,800) and 3 million naira ($19,000) per show and performs three to four times each week. A brand ambassador of Etisalat, one of Nigeria’s telecommunications giants, he also featured in Coca Cola-Nigeria’s World Cup theme song and Microsoft’s Anti-cyber Crime Initiative. He was also face of Samsung products in West Africa. As an entrepreneur, Banky W has invested heavily in various businesses and also doubles as a philanthropist, founding the Mr. Capable Foundation, where he provides tuition fees for indigent and brilliant students. He is also the force behind EME music which has, arguably, Nigeria’s fastest rising artiste (Wizkid) under the label.

Born Ayo Balogun, his deal with MTN is worth N45 million, that with Pepsi is worth about $350,000. He also has an endorsement deal with Guinness and owns a 150 million naira home in Lekki. He bought a Porsche Panamera S worth N14.6 million (the first one was involved in an accident in September 2011), he acquired a N6 million blue Volkswagen convertible. In 2012, he won the ‘Next Rated’ artiste, 2012 Headies Awards, the automobile was a 2012 model of Hyundai Sonata. He charges N3 million to N6 million per show.

She is one of the Nollywood actresses who has made it real big. Unlike many others, she has tried her hands in different ventures, including owning a company that specialises in different businesses. According to a report, she currently owns three buildings

and several landed properties scattered all over the country. She is a Glo ambassador and face of Onga (food seasoning company). She is said to have earned about N20m between 2008 and 2010. She recently joined politics, which might also be lucrative for her if she wins in her consistency.

Born Iyanya Mbuk, he is another successful artiste. He has a N30 million Aston Martin automobile.