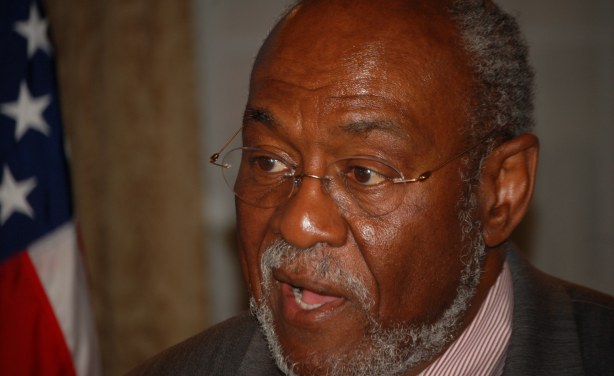 President Barack Obama’s former Assistant Secretary of State for African Affairs, Johnnie Carson, spells out the dangers facing Nigeria in the coming month and calls on the U.S., Britain and the European Union to be more openly and actively engaged in working with Abuja to navigate the difficult period the country is going through.

Nigeria is awash with serious problems which are not likely to go away soon. Africa’s largest and most important country is going through an extraordinarily difficult and dangerous period that could over the next two months see an already high level of violence spike even further and spread to other parts of the country.

These issues are generating renewed uncertainty about the country’s long term stability. Given Nigeria’s regional political and economic importance, the international community needs to push Nigeria up the global priority list and actively engage and help the country in trying to navigate the turbulent period that lies ahead.

Insecurity on the Rise

Boko Haram, the Islamic religious sect that has terrorized northern Nigeria for the past five years, has stepped up its operations in the north-east. In 2014, Boko Haram killed more than 11,000 people, carried out a high-profile kidnapping of 276 school girls, assassinated dozens of government officials and attacked numerous military bases.

Several recent attacks demonstrate Boko Haram’s strength, capacity and changing tactics. On December 29, the group captured a Nigerian military base in the far north-eastern corner of the country, killing dozens of soldiers and civilians and capturing more arms and munitions. The base was intended to garrison a multinational force with troops from Niger, Cameroon and Chad.

And on January 3, Boko Haram militants stormed the town of Baga, destroying homes and shops and leaving more than 500 people dead. During this same period Boko Haram carried out several high-profile suicide bombings, deploying young girls to carry out the attacks.

Taking a tactic out of the playbook of Iraq’s Islamic State (ISIS), Boko Haram has set up a caliphate in Borno state, where it controls an estimated 40 percent of the territory. The government’s efforts to turn back its onslaught have proven ineffective, and the violence has risen and spread further across the north every year since Boko Haram’s founder was killed in 2009. Nigeria’s once-strong military has sustained repeated defeats at the group’s hands and is suffering from low morale, a shortage of arms and poor senior leadership. The situation is unlikely to change and the level of Boko Haram-inspired violence will almost certainly intensify as Nigeria’s elections draw closer.

Nigeria is scheduled to hold presidential and legislative elections on February 14. The country’s presidential contest, between President Goodluck Jonathan and opposition leader Muhammadu Buhari, will increase political tensions across the country and contribute to further unrest in the north-east. Although President Jonathan appeared to have a strong edge at the start of the campaign, the elections are now expected to be closely and hotly contested.

President Jonathan, a southerner and a devout Christian, believes he can win re-election and appears determined to do so. He has the power of incumbency on his side, as well as substantial financial resources. His People’s Democratic Party has the advantage of having the only national political party organization in the country.

He also stands to benefit from the unrest in the north; his critics say the conflict will reduce voter turnout for his opponent, who is a northern Muslim politician. There are also concerns that Jonathan will use the country’s security forces to help turn the election in his favor. In late November, security forces illegally prevented members of the National Assembly from entering their chambers.

Muhammadu Buhari, who is seeking the presidency for the fourth time, believes he has finally positioned himself to win. Unlike in other recent presidential contests, there are only two candidates on the ballot, and a once-divided and fractious opposition has closed ranks behind Buhari. Many of the leading northern politicians are supporting him, including his two most prominent political rivals – Kanu governor Rabiu Kwankwaso and former vice-president Atiku Abubakar.

To the surprise of many, Buhari has also gained some traction in the south, where he has long been viewed with great suspicion. His selection of Yemi Osibajo, a widely respected lawyer from Lagos, as his vice-presidential running mate appears to have gone over well. In addition to his legal credentials, Osibajo is a senior pastor at a large evangelical Christian church and a member of a prominent Yoruba royal family. Osibajo’s presence on the ticket is likely to divide Nigeria’s large evangelical community, which has traditionally voted for Jonathan.

Buhari has also allied himself to some of Jonathan’s strongest political critics in the south-eastern part of the country, where the president has traditionally drawn his greatest support. The popular governor of Rivers State, Chibuike Rotimi Amaechi, has come out strongly for Buhari, saying that Nigeria needs change in Abuja, that the violence and instability in the north threatens all of Nigeria, and that Buhari is the only person who can put an end to the Boko Haram crisis.

The outcome of the presidential election is still unclear. However, as February 14 approaches, the prospects for a very close contest are increasing – and so are the prospects for post-election violence. If President Jonathan should win narrowly, with a margin less than the number of displaced eligible voters in the north unable to cast their ballots, widespread and sustained violence is almost certain to erupt.

Credible reports of vote rigging and blatant interference in the electoral process by security forces will also spark northern violence. Although some observers predict violence in the south-east if Jonathan loses, no one expects those protests to generate the type of reaction expected in the north.

Nigeria’s oil-dependent economy is going through a turbulent period. The sharp drop in global oil prices has had a negative impact on the country’s entire economy and has clouded the outlook for 2015.

For most of the past decade, the economy has been growing at seven percent a year but that has come to an end. Declining oil revenues have put additional stress on the President Jonathan’s government as he prepares for elections and deploys additional resources to battle Boko Haram. Oil production accounts for 35 percent of GDP, 80 percent of government revenue and 90 percent of the country’s foreign exchange.

The value of the naira has fallen by 17 percent, forcing the government to devalue the currency. Nigeria’s benchmark interest rate has also gone up to 13 percent and the country’s once-booming stock market has lost 30 percent of its share value. The government has reduced its spending and placed new foreign currency restrictions on companies. With Nigeria importing more than 80 percent of what it consumes, including large quantities of wheat and rice, inflation and the cost of living are rising.

Nigeria is Too Big and Important to Ignore

Although weighed down by multiple challenges, Nigeria is Africa’s pre-eminent country and largest democracy. With a population of 177 million, it is Africa’s most populous state, the seventh largest in the world, and the world’s fifth largest Muslim country.

Nigeria is also Africa’s leading economy with a GDP substantially greater than that of either of its two closest rivals, South African and Egypt. Nigeria is a player in the global petroleum market. In addition to being Africa’s biggest oil producer, it is the sixth largest oil exporter in the world.

In West Africa, Nigeria is the top economic and commercial power, dominating the banking, insurance, telecommunications, transportation and small-scale manufacturing sectors. And even though its troops have performed poorly at home, Nigeria is one of the United Nations’ top 10 peacekeeping contributor nations.

What happens in Nigeria directly impacts not only the people of that country but the entire West African sub-region and the larger international community. If Nigeria faces a crisis like the one that followed Kenya’s disastrous 2007 presidential elections or is overwhelmed by further Boko Haram advances, there is no international emergency line capable of responding quickly or effectively.

Washington and London Have a Role To Play

Given the likelihood of a close and highly-contested election followed by significant violence in the north if Buhari loses, the United States, Britain and the European Union need to be more openly and actively engaged in working with Nigeria to navigate the difficult period it is going through.

The first order of business is to help ensure that there is a free, fair and peaceful election. A flawed election that ends in violence will exacerbate the security problems in the north-east and further undermine the country’s tightening economy. (Once this election is over, the U.S. and Nigeria need to deal with the second order of business: how to develop a realistic and workable strategy to degrade the continuing onslaught of Boko Haram.)

Washington, London, and Brussels should be acting now. In Washington, the Obama Administration should be calling publicly for:

The Administration should call on both candidates to personally pledge that they (and their political parties) will engage in a non-violent process, that they will adhere to election guidelines and that any electoral disputes will be adjudicated in the courts and not on the streets.

Recognizing the role that local political leaders play in the process, the Administration should send a strong and clear signal to State governors, saying they have a responsibility to ensure the electoral process goes well in their respective states, and they need to cooperate with INEC to make that happen.

The Administration also needs to tell Abuja and the Nigerian people that the international community is watching the election process closely and that flawed and/or violent elections will set back Nigeria’s economy and undermine its image. The Administration should also make clear that Washington will condemn anyone seen to be undermining the electoral process, provoking violence or engaging in vote rigging.

Presidential phone calls to African leaders are not commonplace at the White House, but this is probably a time for President Obama to reach out directly to President Jonathan and Mr. Buhari before any potential crisis occurs. British Prime Minister David Cameron and the relevant European Union President would be wise to do so as well.

Much like the Kenyan elections seven years ago, the Nigerian elections are going to be close and potentially violent and destabilizing. Working to ensure a good election before “Things Fall Apart” will be better for Nigeria, all its neighbors and its friends in the international community.