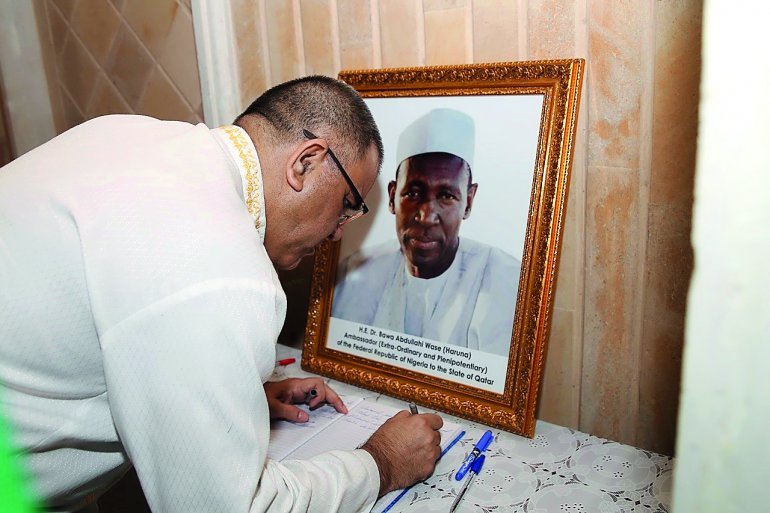 Many top diplomats and Qatari officials attended the burial service of the Nigerian ambassador to Qatar Dr Bawa Abdullahi Wase (Haruna) who passed away on Friday at Hamad General Hospital. His burial service was held at Abu Hamour cemetery, yesterday evening.

Officials, who attend the burial service, expressed grief and said that his passing was unexpected.

“We have lost an intellectual giant. He was a man of integrity and one could always go to him and get very good advise. We are going to miss him tremendously. Whenever there was a function, event or discussion, he would be present. We always saw him in such events,” Ambassador of South Africa to Qatar, Faizel Moosa told The Peninsula. “We were very close and had very good relations with him,” he added.

He added the Nigerian ambassaor was well respected by everybody. “He was an anchor for African Ambassadors and we looked up to him for guidance. He loved Qatar and Qatar loved him. He was the only one who used to wear Qatari attire on Eid day,” he said. “He was always used to give very good advice. Whenever we discuss issues about Africa, his views were very well respected. We have lost a very good friend, brother and a confidante. Its sad day for us,” he added.

Victor Ikoli, General Secretary of Nigerians in Diaspora Organisation, NIDO-Qatar said that the ambassador had died on Friday at Hamad Hospital. It is a big loss for the family and the Nigerian community in Qatar.

“He served his country here about one year, and his loss was shocking as he died after visiting the hospital. He had told his family to bury him her as a Muslim,” he said. “The Nigerian community here in Qatar has a population of around 11,000 and for the community it is very a big loss. He supported the community and believed in every Nigerian. His doors were open to everyone and he welcomed everybody. His humanitarian approach touched everybody and liked to help people,” he added. He said that every Nigerian who met him said good things about him. That is why so many Nigerians and Africans came to attend his funeral. “Although he stayed short time here but he managed to impact the Nigerian community here because he was a man of integrity, a man of honour.”