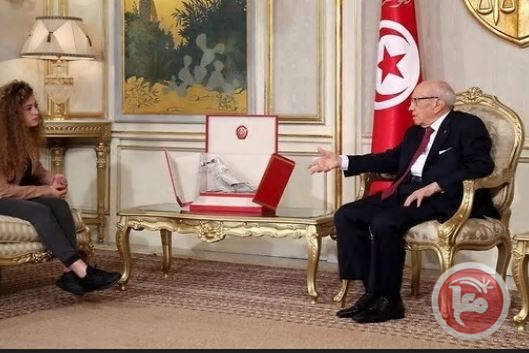 After being honored by the Spanish soccer club Real Madrid, 17-year-old Palestinian icon Ahed al-Tamimi, was hosted, on Tuesday, by Tunisian President, Beji Caid Essebsi at the presidential palace in Carthage City in Tunisia.

Essebsi hosted Ahed, who was imprisoned for eight months for slapping and kicking an Israeli soldier, on the 33rd anniversary of Operation Wooden Leg, during which the Israeli Air Force bombed the Palestine Liberation Organization’s (PLO) headquarters in Tunisia.

The bombing had resulted in the killing of dozens of Palestinians and Tunisians, and injuring many others.

Essebsi personally invited Ahed along with her family to Tunisia; during the meeting, he said “Hosting Tamimi symbolizes Tunisia’s recognition of the just Palestinian struggle and its place in the heart of the Tunisian people.”

He further emphasized Tunisia’s support for the Palestinians and recognition of the Palestinian fight to establish a sovereign state with occupied East Jerusalem as its capital.

“We have great hope that the Palestinian revolution will win. It will win by its children.”

She also stressed that the Tunisian people “are not only our supporters, but they are our partners in the Palestinian cause.”

Ahed was detained on December 19, 2017 after a video went viral on social media platforms, showing Ahed slapping and kicking an armed Israeli soldier, who raided her hometown and shot her 15-year-old cousin Muhammad in the face, in the Nabi Saleh village in the central occupied West Bank district of Ramallah.

Since her detention, Ahed has received worldwide media coverage and has become the image of dozens of solidarity campaigns across the world demanding her release from Israeli prison, and an end to Israeli detention of Palestinian children.