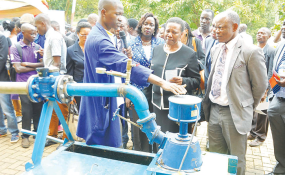 The Minister for Energy and Mineral Development Engr. Irene Muloni, has recently announced the official launch of the East Africa Centre for Renewable Energy and Energy Efficiency (EACREE), at Makerere University Uganda.

Engr. Muloni who is an alumnus of the Makerere University, said she was pleased that this place was chosen to become a regional centre of excellence to increase access to modern, affordable and reliable energy services.

“The initiative will improve energy security and the mitigation of negative emissions by creating an enabling environment though informing policy, capacity building and creating awareness to the public,” she said.

The Minister also added that the facility would support the efforts to realize adequate renewable energy, which is important in promoting industrialization.

“The majority of Ugandans is in the rural areas and relies on bio mass including charcoal and agricultural waste for energy. Fortunately, 85% of the energy Uganda relies on is renewable and thus the need to fully tap into its potential,” she said.

Cedat is the home of the EACREE, and also the place where a group of faculty and students came together to develop the Kayoola EV bus, as well as several research projects dealing with renewable energy.

The principal of Cedat, Dr Henry Alinaitwe, had in an earlier statement explained that the establishment of the EACREE came about after by the East African Community (EAC) member states, and is to be supported by United Nations Industrial Development Organization (UNIDO) and Austrian Development Agency (ADA).

Deputy Secretary General East Africa Community, Jessica Eriyo commended ADA, UNIDO and the government for their continued support to the centre to advance science and technology in Uganda.

The launch concluded with an exhibition, in which Cedat staff and students showcased their innovations, before taking a ride aboard the first-ever solar-powered bus, Kayoola EV