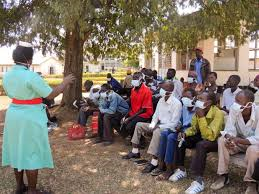 Patients suffering from multi-drug resistance tuberculosis (MDR-TD) are set to receive food and transport of about Shs170,000 during their monthly visits to hospital.
According to Mr Ronald Ssegawa Gyagenda, the undersecretary at Ministry of Health in charge of Global Funds, the decision to have food procured by the regional referral hospitals was reached after it become untenable to buy food for patients at the centre in a process that has failed since 2012.
“We want hospitals that admit these patients to be responsible for the money. For food, the hospital will buy and provide to the patients when they come for their monthly check-ups,” siad Mr Gyagenda.
About $3 million (Shs10b) worth of a grant was allocated to government by global fund to buy food for MDR-TB patients for three years in order to help them recover quickly and adhere to treatment.
The Geneva-based Office of Inspector General (OIG) put Ugandan’s grant absorption at 46 per cent during an audit conducted in October last year. The money has been idle for the last three years.
Dr Frank Mugabe, who heads the National TB and Leprosy programme (NTLP) said the ministry has discussed a mechanism to transfer funds to regional referral hospitals such that they use their already existing suppliers to buy food.
“It is hoped that this process will fast-track the delivery of food for more than 400 patients with multi-drug resistance tuberculosis who need a balanced diet,” Dr Mugabe said. He added that the hospitals will also provide transport fees of about Shs170, 000 to each patient.
However, at the meeting, some hospital directors were divided on how the money for food should be given to patients, with some suggesting that patients be given hard cash for both food and transport.
Dr Steven Waako, the acting medical director Iganga hospital, said at the meeting, it had been resolved that food be given in kind to patients and transport fees given in hard cash.
Explaining the need for transport, Dr Mugabe said it was recognised that patients travel long distances and some fail to turn up for checkups thus affecting the recovery and treatment process. He also noted that this year’s World TB celebrations will be marked in Kyenjojo District on Thursday under the theme: “United to end TB.”