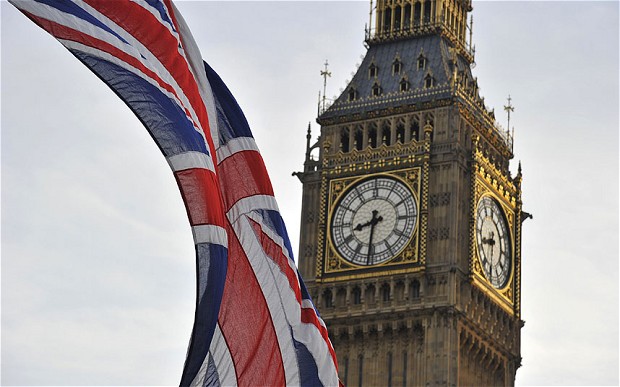 Britain’s economy picked up more speed between July and September, growing at its fastest pace in more than three years and building on an unexpected turnaround that has buoyed the government.
Gross domestic product rose by 0.8 percent, faster than the 0.7 percent achieved in the April-June period, Britain’s Office for National Statistics said on Friday.

The quarterly growth and the year-on-year rate of 1.5 percent were in line with forecasts by economists in a Reuters poll. The numbers also made Britain, until recently a laggard among the world’s rich countries, one of its fastest-growing economies with an annualized growth rate of over 3 percent.
British government bond prices initially rose, reflecting expectations among some investors that quarterly growth might have been closer to 1 percent, but quickly fell back. The pound strengthened slightly against the dollar and the euro.
Joe Grice, chief economist at the ONS, said quarterly growth could have reached 0.9 percent but for weak gas and electricity output. That was possibly a reflection of Britain’s unusually hot summer this year.

Samuel Tombs, an economist with Capital Economics, said Britain’s economy was unlikely to gather much more pace because of wages that are rising less than inflation, more government spending cuts and the dormant euro zone, reports Reuters.
“But with employment growing, confidence returning and productivity still well below its potential, it seems unlikely that the recovery will fade significantly either,” he said.

Britain’s economy has staged a surprising recovery since early 2013 when it avoided falling back into recession.
The turnaround has given a boost to Conservative finance minister George Osborne, who defied calls from the International Monetary Fund and the opposition Labor Party to bring forward spending in order to get the economy off the ropes.
The government hailed the growth figures as proof that its tough approach to public spending was paying off.
“Many risks remain, but thanks to our economic plan, the recovery now has real momentum,” a Treasury spokesman said.
STILL SMALLER
The growth between July and September meant the British economy expanded for three successive quarters for the first time since 2011.
Nonetheless, unlike almost all other developed economies, which have fully recovered output lost during the financial crisis, Britain’s economy remains 2.5 percent smaller than its previous peak in early 2008.
Bank of England Governor Mark Carney noted on Thursday that growth was coming from a low base, so Friday’s figures are unlikely to sway policy at the bank, which has suggested it will keep interest rates at their record low of 0.5 percent for three more years.
Earnings are lagging inflation, raising questions about the sustainability of the recovery and giving ammunition to Labor to attack the government in the run-up to a general election due in 2015.

Friday’s data showed Britain’s giant services sector, which accounts for nearly 80 percent of the economy, expanded by 0.7 percent from the second quarter and was now above its peak before the financial crisis hammered Britain.
Growth in services was driven by the private sector, while government services lagged behind, a reflection of Osborne’s push to curb public spending.

Manufacturing grew 0.9 percent, and construction, which has begun to recover after a sharp contraction caused by the crisis, expanded by 2.5 percent, the strongest in more than three years as house building picked up, the ONS said.
Consumers, a key engine of Britain’s economy, are feeling increasingly upbeat, a separate survey showed on Friday.
A consumer confidence index compiled by market researchers YouGov and the Centre for Economics and Business Research hit its highest level this month since it was launched in April 2009.

The survey showed that expectations of higher house prices were driving the increase in confidence; homeowners expected their properties to be worth 2 percent more in 12 months’ time, almost double the expected gain in July’s survey.
Critics of the government’s economic policies say its attempts to revive the housing market will not help bring about the long-hoped-for rebalancing of Britain’s economy towards more manufacturing and exports.

The ONS’s preliminary estimates of GDP are among the first released in the European Union, and are based partly on estimated data. On average, they are revised by 0.1 percentage points up or down by the time a second revision is published two months later, but bigger moves are not uncommon.