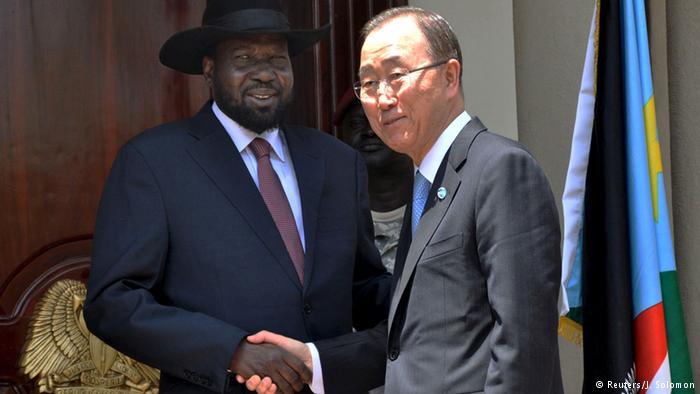 UN Secretary General Ban Ki-moon has recently arrived in Juba as part of efforts to advance the peace accord aimed at ending the country’s civil conflict.
Ban’s visit to Juba came as the South Sudanese government and opposition prepare to form a unity government, in which rebel chief Riek Machar will serve as first vice president.
He called on South Sudan leaders to rebuild mutual trust and and respect the terms of a peace agreement that ended two years of civil war last year.
The UN chief also said a global aid appeal for South Sudan is just 3 percent funded, and the world body is releasing $21 million in emergency money to help. Ban spoke after talks with South Sudan’s president and rebel leader.
He appealed to them to put peace above politics and establish a transitional government of national unity, saying the government must step up to its responsibilities to protect the population.
“Respecting the terms of the peace agreement is not an option, it is a must,” Ban said.
Speaking to reporters after the meeting, South Sudan’s foreign minister said Kiir assured the secretary-general of his commitment to implement the accord.
He said Ban assured the president “that he will urge Machar to come to Juba as soon as possible so the transitional government of national unity can be formed.”
The August deal, signed under international pressure, leaves Kiir as president and returns Machar to his old job as deputy, but in a sign of the levels of mistrust between the two men Machar remains in exile despite his reappointment earlier this month.
South Sudan won its independence from Sudan in July 2011 after decades of civil war, but less than 18 months later Kiir and Machar’s political battle for control of the ruling Sudan People’s Liberation Movement (SPLM) became a real war splitting the country along ethnic lines, pitting Kiir’s Dinka people against Machar’s Nuer.