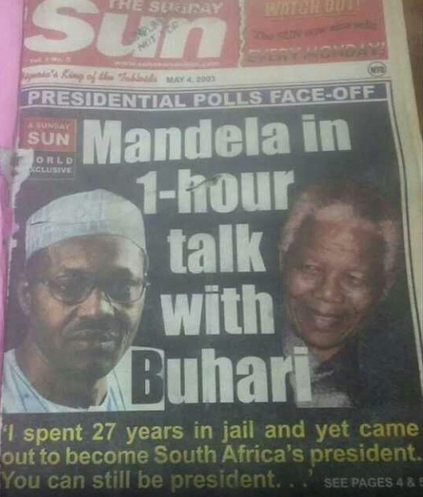 Far back in the past, when the late South African president Nelson Madiba Mandela told Nigeria’s president-elect, Muhammadu Buhari, that he could still rule the country, the ex-soldier perhaps took it with a grain of salt.

Prior to the 2003 presidential election which Buhari was contesting against Olusegun Obasanjo on the platform of the All Peoples Party, Mandela in a one-hour talk reminded him that he (Mandela) was imprisoned for 27 years but never lost hope, and later was elected as South Africa’s first black chief executive.

Therefore, in their face-to-face conversation Mandela tried to inspire Buhari to victory by saying:

“I spent 27 years in jail, yet I came out to become South Africa’s president. You can still be president.”

Mandela’s so-called prophecy has triggered controversy among Nigerians. Some people insist that comparison of the two leaders is impossible while others  truly believe that  the president-elect can become the national hero that Mandela did.