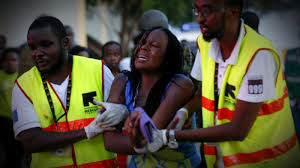 In a prepared speech after the murder of dozens of Kenyans at Garissa University College, President Uhuru Kenyatta declared a national war on terror. “This is a war against Kenya and Kenyans,” he said over the weekend. “It is a war that every one of us must fight.”

It was a speech he gave in December after the killing of 36 miners working in a quarry not far from the border with Somalia. They were reportedly slain by members of the terrorist group Al-Shabaab.

Once again, Kenyans reeled in shock as news of last week’s massacre of at least 147 students – nearly all young Christian males – by a small rebel band filtered through the media.

Despite its peaceful appearance, the [Garissa] university college was a known target for the fury of the Somali-based Al-Shabaab group which has been at war with Kenya for many years. The fact that only a small handful of security guards were on duty when the attack began shocked many.

The slaughter began in the dark pre-dawn hours of Apr. 2 while everyone slept until they were awakened by the popping sounds of gunfire. The militants urged students to cooperate. “If you want to survive, come out. If you want to die, stay inside,” they warned the still-groggy students.

“I knew those guys were lying,” said a 23-year-old student Elosy Karimi who described to a reporter how she hid in the ceiling above her bunk bed for over 24 hours.

President Barack Obama, still planning a trip to Kenya, commiserated: “Words cannot adequately condemn the terrorist atrocities that took place at Garissa University College, where innocent men and women were brazenly and brutally massacred. We join the world in mourning them, many of whom were students pursuing an education in the pursuit of a better life for themselves and their loved ones. “

“They represented a brighter future for a region that has seen too much violence for far too long.”

Garissa University College lies northeast of Nairobi, near to the border with Somalia. A small school with a staff of 75, it was recently upgraded to give technical and vocational degrees as part of Moi University. Computer science and information technology were introduced last year. But the bucolic nature of the college, highlighted by a flock of sheep, green leaves and natural springs, was apparent on the school’s website.

Despite its peaceful appearance, the university college was a known target for the fury of the Somali-based Al-Shabaab group which has been at war with Kenya for many years. The fact that only a small handful of security guards were on duty when the attack began shocked many.

It was particularly inexplicable as there had been recent warnings of an Al-Shabaab attack at Garissa and other universities. A travel advisory issued by the British government just days earlier had warned against travel to Garissa.

While some foreign media outlets describe Kenya as “powerless in the face of a ruthless terrorist organisation,” Kenya is a major military power in the region, having one of the highest defence budgets in Africa, thanks to two decades of a steady increase in military spending.

According to the Stockholm International Peace Research Institute (SIPRI), an independent research organisation, the country purchased 19.8 billion Kenyan shillings (216 million dollars) worth of advanced weapons in five years between 2010 and 2014, up from 919.4 million Kenyan shillings (10 million dollars) between 2005 and 2009 — marking a huge jump in the period — which is the highest in the East Africa.

Yet four gunmen managed to hold off elite counter-terror police and military units called to the scene while they systematically massacred “hostages.” This is hardly unprecedented,” Patrick Gathara, a security analyst wrote in Al Jazeera news service.

“Much the same happened at Westgate (Mall) where four gunmen supposedly kept hundreds of cops and soldiers at bay for four days, apparently taking time off to pray and relax while the security agents looted the mall.”

“The government responded with a crackdown that targeted the ethnic Somali population within Nairobi – little more than an exercise in scapegoating and extortion,” he recalled. “Similarly, Garissa itself, which is populated mainly by ethnic Somalis, has been the site for ‘security operations’ – another term for collective punishment – for well over half a century.”

Government’s failure to stem the rise in insecurity has not gone unnoticed in the Kenyan community, especially since Kenya’s incursion into Somalia in Operation Linda Nchi in 2011. A reduction of troops was expected in 2014 after complaints by the Somali government.

A Twitter feed titled #GarissaAttack quickly filled up with comments and complaints. Ory Okolloh Mwangi, well-known ‘Kenyan pundit’, wrote: “When you look at the resources poured into winning one single seat in Kajiado Central, and then how we are responding to Garissa. Ai?”

Senator James Orengo pleaded: “We know very well the consequences of a war of occupation. We must withdraw our troops from Somalia to end this. We must rethink our strategy and have a targeted and principled way of engaging Somalia rather than put our people at risk.

Questions are forming, wrote Gathara, about whether this disaster is just the latest in a series of preventable terrorist atrocities that have now claimed more than 350 lives in the last two years.

An earlier security operation, a week into the Kenyatta presidency, saw the indiscriminate arrest of over 600 Garissa residents, including newly-elected local leaders, by a security team the government itself had described as “rotten”, wrote Gathara.

“What is Kenya’s plan as far as Somalia is concerned?” asked Abdullahi Boru Halakhe, East Africa researcher with Amnesty International, regarding the Kenya’s troops stationed in Somalia. “What does the exit plan look like? Is it two years? Is it three years”?