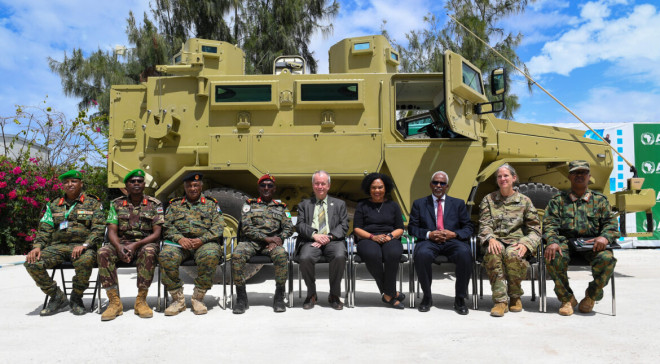 The 24 armoured personnel carriers (APCs), donated by the U.S. government will boost the A.U. forces’ capability to fight the militant group al-Shabab.

The specialized vehicles will be used by the A.U. Djiboutian contingent in joint military operations with the Somali National Army (SNA) in and around Beledweyne — the capital of Somalia’s central region of Hiran.

Ambassador Andrè said the APCs will protect troops against roadside bombs.
“The expression of our support, amongst other ways, is the donation of these vehicles to help protect African Union forces–in this case, Djibouti’s military contingent–as they travel the roads of Somalia which too often will be trapped by dangerous explosive devices put there to harm those who only seek to help Somalia,” he said.

A top African Union official, Fiona Lortan, said the military hardware had arrived at an opportune time as the mission is reconfiguring its troops and equipment.

“On behalf of the African Union, its membership, and all the ATMIS troop-contributing countries, including Djibouti and all the others since ATMIS is a collective effort of solidarity and support to the Somalia people, I would like to thank the government and the people of the United States for the generosity and steadfastness in supporting our presence in Somalia,” said Lortan.

Al-Qaida-affiliated al-Shabab has been fighting Somalia’s government and A.U. peacekeepers in Somalia for 15 years, seeking to install a strict Islamist state like the Taliban in Afghanistan.

In May, the group attacked an ATMIS base in Somalia’s Middle Shabelle region, using suicide bombers to detonate three cars filled with explosives.

The military support by the U.S. comes as Somalia’s new president, Hassan Sheikh Mohamud, announced that he is determined to wage war against al-Shabab militarily, as well as on economic and ideological grounds.

The Somali military said it conducted an operation against al-Shabab in Somalia’s central Hiran region this week, killing 30 al-Shabab fighters.

In May, U.S. President Joe Biden authorized the re-deployment of U.S. troops to Somalia to help fight the militants. Biden’s predecessor, Donald Trump, pulled around 700 American troops from the east African country during the final month of his presidency.