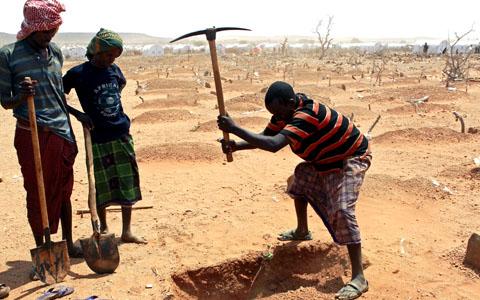 Aid agencies in Somalia has recently launched a Call for Aid seeking USD 105 million to scale-up critical, life-saving assistance and build resilience for more than one million people in the drought-affected northern regions of the country.

The severe drought, exacerbated by El Niño conditions, which is ravaging parts of Puntland and Somaliland, has compounded an already challenging humanitarian situation.

The severe drought conditions have taken a toll on lives and livelihoods. If funding is not secured now, the consequences will be grave, especially in light of a less than favourable forecast for the coming Gu rainy season. Malnutrition-related deaths have been reported in Awdal region.

Loss of livestock due to poor pasture and water availability is negatively impacting family income and causing a sharp rise in indebtedness. Without access to emergency health services, water and sanitation, thousands of people could face death due to preventable causes.

“We have reached a critical point in Puntland and Somaliland. Urgent action is required right now. If not, we risk a rapid and deep deterioration of the situation, as drought conditions may worsen in the coming months. Communities are already losing their means of survival. The time to fund is now to come back from the tipping point, avoid a greater crisis and avert loss of lives and save livelihoods,” said Peter de