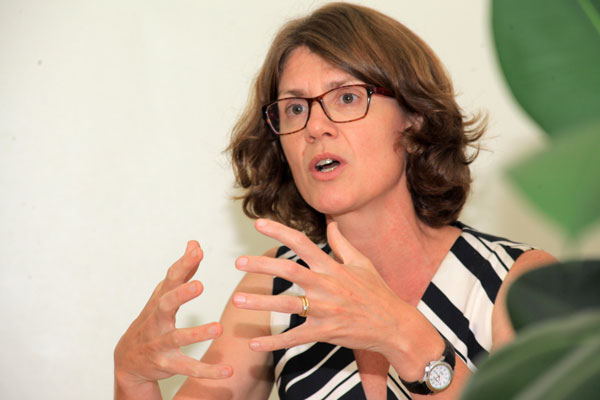 The United Kingdom’s partnership with Africa is incredibly important to us. In the UK perspective, Africa’s success in the medium and long term matters.

Uganda rightly aspires to reach the middle income status and that economic growth is going to be important to achieve that. One of the UK’s priorities is to get behind Uganda’s plans to try and improve its economic growth. This is because we know that trade is critical to Uganda’s economic growth and no country in the world has ever achieved economic growth without increased trade.

Beyond that, Uganda is a land locked country, it links Kenya, Tanzania, Burundi, South Sudan and DRC. So, the trade link is important for not only Uganda but also the wider East African Community (EAC) region. Because of all that, the UK’s focus is on supporting Uganda to improve its economic growth.

We do that in many ways. We spend about £140 million (about Shs662billion) per year only in Uganda. This is in addition to another £60million (about Shs285billion) is spent in multilateral organisations. So in total, the UK will be contributing about £200 million (about Shs946 billion) in Uganda this financial year. That money is spent on various programmes such as improving human capital, health and education.

Some of the funds are also spent in improving the country’s roads. We have a programme with the Africa Development Bank to build about 200km of roads that are particularly important for trade routes. Within that, programmes which are focused on improving trade in Uganda and over the region will be our focus.

In terms of what we have been doing, since 2010 we have provided £40million to remove barriers along key trade and transport corridors. That has reduced on the time it takes for individual firms to move goods into and from Uganda.
We also supported the economic integration across the East African community. We have invested in over 200km trade routes linking Uganda to Rwanda.

We have also promoted the free trade agreement across Africa which is now at the start of implementation stage by African Union countries. Over the years, we have seen the average time it takes for crossing borders drop by 60 per cent.
We have seen an 80 per cent reduction in customs clearance time from three days to an average of two hours which is a remarkable improvement.

We have seen a reduction in the cargo transit time through Uganda from taking weeks in 2011 to two days now. That has been partly helped by implementation of the electronic cargo tracking system. We have also seen an increase in revenue collection by the Uganda Revenue Authority and that has been through various methods to modernise the way revenue is collected.

The work we have been doing, including with Trade Mark East Africa, has been successful and we have shall continue supporting them in the coming years—up to 2021. We shall be giving them additional resources that will be used to reduce the time it takes for transit of goods in Uganda. We hope this will help increase prosperity for everybody and not just the wealthy.

We are also going to work at improving products standards so that goods can have the quality for export and farmers get better prices for their products.

We shall also continue supporting a range of trade policy issues, for example, non-tariff barriers and trying to improve national content of goods produced in Uganda.

We shall continue building enhanced customs and ICT investments that enhance trade.
Through DFID, we are going to be focusing on other barriers that will have a less direct impact on trade but will impact on improving economic development and trade in Uganda. We also have a big anti- corruption programme because we know that investors are going to feel more confident in coming to work in Uganda if there is a clearer system that works well for them.

This will be in addition to agribusiness programme which will support private companies to develop ideas and grow their businesses. We are also doing some work around investment promotion with Uganda Investment Authority (UIA) because attracting investment in Uganda is important and vital for trade. If Uganda is producing more, there will be more goods and increased export especially in the region.

Trade Mark East Africa will, in next 3-4 years, also focus on products quality. If farmers can achieve those standards, they would get a much higher return for what they are producing.

In addition, the Common Wealth Standards Programme has just started in Uganda after being launched during the Common Wealth Summit in London earlier this year. And Uganda is a target country for that programme. Through the programme, the British Standards Institute is going to work with Uganda National Bureau of Standards to improve standards that will hopefully improve trade.

We have upfront conversations with government about that. If, for example, the infrastructure that is being built is important, then government should have resources to maintain it once it has been finalised and handed over to them. Or if we are delivering a system, it is important that government has people who can operate and manage that system once it is in place. There will be a programme with a discussion around that. There is no point for the DFID or UK doing anything if the government is not committed in sustaining what has been achieved.