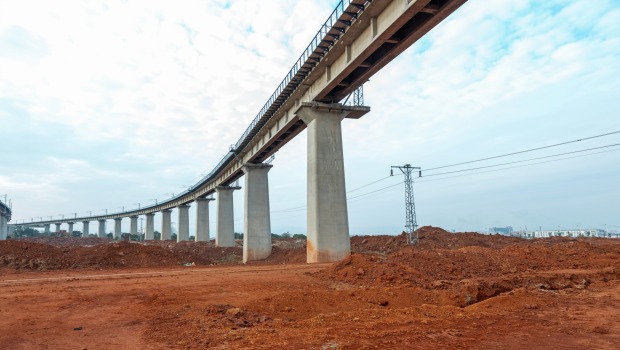 Strong transportation infrastructure can be a boost for jobs, economic development and quality of life. But the condition of roads, railways and ports has long been slowing local business and foreign investment in Africa.

And much of that integration revolves around energy.

But whether or not Africa’s railways, ports and road infrastructure development will be “green,” it will be expensive – estimated to need $100 billion annually for improvements. Butaccording to the African Development Bank, “Africa invests only 4 percent of its collective GDP in infrastructure, compared with China’s 14 percent.”

“These numbers vary from who you’re quoting and it’s different if you’re looking at sub-Saharan Africa or the whole continent,” Vivienne Sequeira, the Corporate Council on Africa’s Director of Infrastructure told AFKInsider. “So it has to be qualified.”

The Corporate Council’s 6th U.S.-Africa Infrastructure Conference on Oct. 7-8 in Washington, D.C., had the theme “Building Resilient Cities” and highlighted how Africa is coping with rapid urbanization – including intermodal transportation.

“The infrastructure in cities is where the most immediate infrastructure deals can be made, I think, and that’s why we put the emphasis on that,” Stephen Hayes, president and CEO of the Corporate Council on Africa told AFKInsider.

“What we tried to do is give U.S. companies and others there a greater range of potential financing and where it might come from beyond U.S. banks and the Ex-Im Bank. And what’s also been very helpful is that the Africa Development Bank has joined Corporate Council on Africa, and that also sure helps U.S. companies as well,” Hayes added.

The African Development Bank launched the Africa50 Fund earlier this year with the long-term strategic aim of investing $10 billion and facilitating total project investments of $100 billion by enticing investors.

There is a lot of work to be done. The World Economic Forum’s Global Competitiveness Report 2014 – 2015 of 144 world economies ranked sub-Saharan Africa’s infrastructure. While the report found transport infrastructure in Mauritius (ranking 42nd), South Africa (32nd) and Namibia (52nd) “good by regional standards,” other countries don’t fare so well. According to the report: Tanzania (130th) has “poor roads and ports;” Mozambique (128th) needs to make “critical investments across all modes of infrastructure;” and in Angola (139th) “the continent’s second biggest oil exporter — infrastructure is one of the least developed globally.”

The African Development Bank estimates that costs for transporting goods are 63 percent higher in Africa than in developed countries, hampering international and local business.

“The biggest issue is the talk of transporting goods on the continent,” Corporate Council’s Sequeira told AFKInsider, noting there was some discussion at the Council’s conference about long-haul roadways across the continent.

Mwangi Kimenyi, senior fellow and director of the Brookings Institute Africa Growth Initiative says if you look at the new projects, such as the new railway from Mombasa to the interior of Kenya, they are “trying to open up the interior.”

“The minister of Uganda discussed the new road that’s being built between Kisangani in the DRC all the way to the coast,” says Sequeira. “So, that one is really helping intra-Africa transportation.”

Another future project discussed was building a road from Cape Town to Cairo, which is part of the New Partnership for Africa’s Development’s (NEPAD) ambitions.

“They are considered regional projects. There are several roads now linking east African countries that are what we call the ‘East African Community Roads’ – again, trying to open-up the region for trade and movement of people in the area,” Kimenyi told AFKInsider.

One way to cut costs and function in a more sustainable way is through intermodal transportation – the coordinated movement of goods through the interconnection of ports, railways and trucking.

“Several of the panelists across the conference talked about the long time it takes to get goods through ports,” Sequeira told AFKInsider. “Most of the ports are at full capacity.”

With Turkish funding, the Somali government is rebuilding the country’s airport and seaport. The international airport in Mogadishu is expected to be completed in 2015 and Somali authorities handed over management of the Port of Mogadishu to the Turkish firm Al Bayrak Company for upgrading to international standards.

Nigeria also has shipyard infrastructural opportunities for private investors in the on-going development of the Nigerian Maritime Administration and Safety Agency’s dockyard in Okerenkoko, where ground breaking took place early this year.

Meanwhile, Tanzania’s government announced on Oct. 27 that construction of a Chinese-funded $10 billion port at Bagamoyo will start in July 2015 north of Dar es Salaam.

It is estimated that 30 percent of all new projects in Africa stem from Chinese investment to ensure the free flow of the mineral resources it needs from the continent. And that flow requires railroad infrastructure.

The Brookings Institute notes that in the past few years, “Chinese railway construction companies have achieved great business successes in Africa.”

Construction of the $3.8 billion deal — signed by Chinese Premier Li Keqiang and Kenyan president Kenyatta earlier this year — for a railway linking Kenya’s port city of Mombasa with Uganda, Rwanda, Burundi and South Sudan is to begin in October 2014.

Brookings Institute notes that the key to such massive procurement deals with the Chinese has been the adoption of “Chinese standards” in the railways.

“The different track gauge standards in Africa have been a significant obstacle in establishing the regional railway network. As a result, Chinese companies have managed to convince African governments of the need to accept Chinese technical standards in rail infrastructure,” notes the Brookings report.

Though rail can carry a lot of freight and is critical to port activity, roads remain critical to Africa’s infrastructure development.

“As economies grow people become more wealthy and development is taking place and infrastructure is being developed, so there will be more cars on the street and that’s not good for the environment,” Alexander Ochs, director of the Climate and Energy Program at Worldwatch Institute told AFKInsider.

“So, doing that more sustainably requires solutions, and some of those solutions are there but it’s going to be a really difficult challenge to make sure that they are seen as the more attractive option in comparison to just cars that burn fossil fuel,” Ochs told AFKInsider.

But Ochs says it isn’t necessarily road versus rail.

“It’s about how you use the technology,” Ochs told AFKInsider.

The Maputo, Mozambique, Municipal Council announced on Oct. 2 that it was launching dedicated bus lanes in some major thoroughfares for a fleet of buses to begin operating in January 2017. Brazilian company Ordebrecht conducted geotechnical studies for the $225 million project, of which $180 million is coming from Brazil.

“I think buses have a role to play if you really look at the environmental footprint of buses versus trains,” says Ochs, who notes “sometimes buses are the more greener and cleaner version of trains.”

“As a general rule, you can say if buses are full, then they are usually more sustainable than trains – specifically if you have to build new tracks and so on,” Ochs told AFKInsider.

Many believe that Africa’s growth and urbanization presents an opportunity for transportation infrastructure to “leapfrog” to more sustainable technologies.

But reaching a “green economy” with transportation is much more difficult than achieving set goals in the electric power sector – such as 20 percent renewable energy by so-and-so date.

“The transport sector remains almost entirely reliant on oil products, with few policies in place to promote the use of alternative fuels, such as biofuels” notes the International Energy Agency African Energy Outlook report.

“Generally, transportation is a big area where most of us really are worried that countries that are extremely ambitious will really reach their goals simply because it’s a lot more difficult to get cars – that are a long-term investments for individuals – off the street and replace them with more sustainable ways of transportation,” says Ochs.

A more positive dynamic is vehicle fuel efficiency. According to the International Energy Agency’s African Energy Outlook report, sub-Saharan Africa relies heavily on imports of second hand vehicles from Japan and Europe, which both have comprehensive fuel economy standards in place.

“To a degree, these standards are progressively imported helping to improve the region’s average efficiency,” notes the report, which concludes:

“Interest in building vehicle manufacturing or assembly plants in Africa is also expected to be a factor in pushing policymakers to consider fuel-economy policies more seriously or, where they exist, to impose them more stringently.”