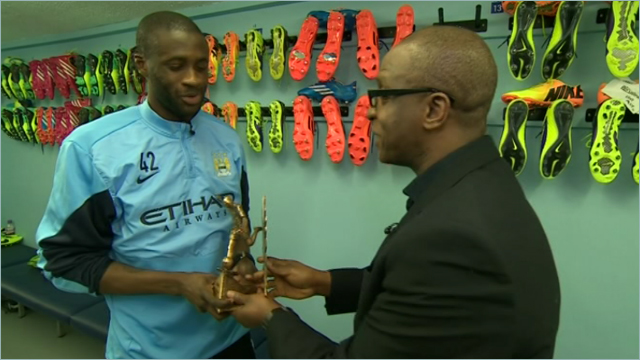 Yaya Toure has won the 2013 BBC African Footballer of the Year award.

The Ivory Coast and Manchester City midfielder, who had been nominated in each of the past four years, beat Pierre-Emerick Aubameyang, Victor Moses, John Mikel Obi and Jonathan Pitroipa to this year’s crown.

The 30-year-old told BBC Sport: “I think I’ve been nominated for five years in a row and finally winning the award is amazing.

“It’s a fantastic achievement because I don’t think there has ever been as many quality African players in top-level international football as there are now: Aubameyang, Pitroipa, Mikel, Moses, Salomon Kalou, Gervinho… we have fantastic players.

“I also think African football is improving and that means a lot to us. And as an African, I’m very happy.”

The shortlist for the award was drawn up by 44 football experts across Africa, who based their choices on players’ skill, technical ability, teamwork, consistency and fair play.

A record number of fans then voted for their favourite either online or by text message.

And those fans have considered Toure to be the standout African player over the past year, in recognition of the Ivorian’s displays of power, pace, creativity and goals.

Toure said: “Thank you to all the fans around the world who continue to support me. It shows how much fans love you and appreciate your job as well.

“It’s something special because it’s not the vote of the manager or the club or the captain of the national team, it’s just the fans.

“When you have a lot of fans behind you, it’s always amazing. And I’m very happy as it is the fans who have given it to me – so I’m very appreciative.”

While 2013 was not the most successful in terms of silverware for Toure – he did not manage to win anything with club or country – he still impressed hugely with his consistently high level of performances.

And after the disappointment of failure to defend the Premier League title with City, Toure came back stronger at the start of the new season and has added a new dimension to his game in the form of free-kicks.

He curled in a sublime effort against Newcastle United on the first day of the season and repeated the feat against Hull in his side’s next home match. Toure has scored four times direct from a set-piece so far in the league this term in a total of seven goals for his club.

In 2013 to date, Toure has found the net 13 goals for club and country – a very respectable figure for a midfielder.

Allied to his clinical finishing, Toure’s drive and leadership have helped City to fourth in the league table.

He was also a key figure in Ivory Coast’s successful qualification for next year’s World Cup finals in Brazil.

The Elephants needed to shrug off a disappointing Africa Cup of Nations Campaign earlier in the year – they lost in the quarter-finals to eventual winners Nigeria – and Toure has been inspirational.

Off the field, Toure has led the fight against racism after suffering abuse during a Champions League match against Russia’s CSKA Moscow in October – demonstrating a strength of character to match his sporting ability.

The unsavoury episode might have affected the form of lesser players, but Toure has been exceptional ever since.

And in the fifth consecutive year he has been nominated for the BBC African Footballer of the Year award, Toure has finally been voted the best player on the continent.