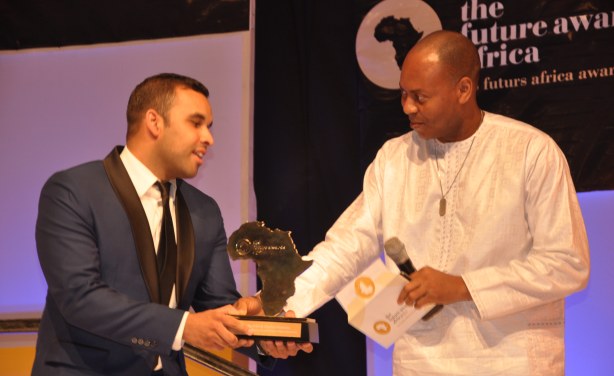 The future progress of Africa, as a continent, is in the hands of its youthful population, Phillips Oduoza, Group Managing Director and CEO of United Bank for Africa (UBA) Plc has said. He said this on Sunday December 7, 2014, during the Future Awards and Summit also popularly known as The Future Awards where hundreds of youths gathered at the prestigious Intercontinental Hotel, Lagos to celebrate youths excelling in different aspects of life.

UBA was a lead sponsor of the awards and summit as part of its commitment to the development of the next generation of future leaders in Africa.

Explaining why UBA was sponsoring ‘The Future Awards Africa’ the GMD/CEO, UBA Plc, Phillips Oduoza, represented by the Divisional, Head, e-Banking UBA Plc, Dr. Yinka Adedeji, said “Over 50 percent of Africans are youths. As a pan-African bank with operations in 19 African countries, UBA aligns its vision to the aspirations of the continent’s youthful population by developing tailor made products that aligns with the aspirations and ambitions of the African youth. For example, our Next Generation account also known as “NextGen” is specifically targeted at youths and is about building the next generation of educated and enlightened professionals, employees, entrepreneurs, self employed persons, from all walks of life, early in their financial life cycle.”

He spoke during the presentation of the prize for “the Future Africa Award in Agriculture,” won by Samir Ibrahim and Charles Nichols, Founders of SunCulture, Kenya; a solar-powered irrigation kit which makes it simpler and cheaper for farmers to grow food. The kit replaces expensive diesel and petrol pumps.

UBA also endowed The Future Africa Awards “Young Person of the year,” which was won by Sangu Delle, Co-Founder, Cleanacwa, Ghana; a 27 year old entrepreneur from Ghana who built a Clean Water organisation that has impacted tens of thousands of people in rural Liberia and Ghana. The prize was presented by the representative of President Goodluck Jonathan, Bonni Haruna, Minister of Youth Development and two time governor of Adamawa state.

One of the major highlights of the evening was the final phase of The Future Awards Africa’s #STOPEBOLA campaign, which was held via an auction on a custom piece by A-List haute couture designer, Lanre Da Silva Ajayi with a winning bid of N1Million on the dress. The proceeds will go to the UN Ebola Response Fund.

The awards which was hosted by Iyanya, Osas Ighodaro, Ice Prince and Flavia from Uganda, saw 10 outstanding individuals rewarded for their excellent work across different fields: business, entertainment, politics, science and technology and education.

The Future Awards, are a set of awards given by The Future Project (TFP), a social enterprise set up with a strong, practical commitment to human and capital development, especially in Africa. The Future Project is the largest home-grown network of policy-makers, business people, and other stakeholders in Young Africa.

It is also committed to finding effective and innovative ways of addressing social issues. It has become one of the most respected private sector-driven development platforms with a history of verifiable impact, including in under-privileged and grassroots communities.