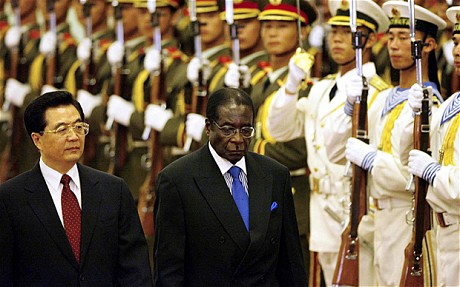 There were indications that the Chinese government had assured the Zimbabwean delegation – led by President Mugabe – that there would be no cap on how much Beijing can avail to Harare on viable projects from which loan repayments would be recouped from the same.

The President, who is here on a week-long state visit, witnessed the signing of the agreements that include a memorandum of understanding for feasibility studies on the digitalisation of the national broadcaster ZBC and Transmedia ahead of the June 2015 International Telecommunications Union deadline after which all broadcasters should have switched to digital.

A consortium of private Zimbabwean and Chinese companies, China Africa Sunlight Energy (CASECO), signed an integrated project worth over US$2 billion that will see the firm constructing a 600-megawatt thermal power station in Gwayi by 2017, produce 2,4 million tonnes of underground coal per year, construct the Gwayi-Shangani Dam as well as construction of Gwayi-Insukamini Power Station transmission line.

The company is a joint venture between Oldstone Investments, a Zimbabwean company and a Chinese firm, Shandong Taishan Sunlight Investments, with its consortium HCIG Energy Company Limited and Cad Fund.