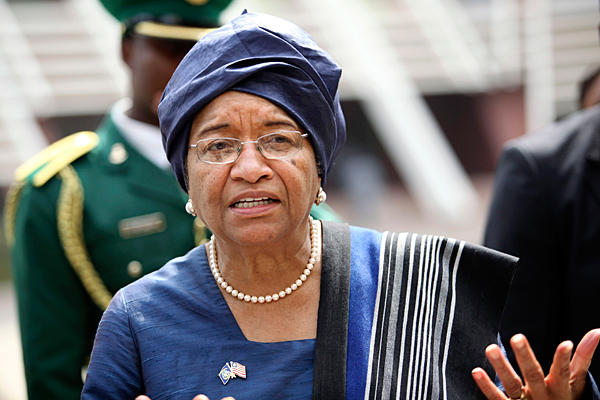 Liberian President Ellen Johnson Sirleaf has ordered the dismissal of some junior and senior level cabinet ministers, who, in the wake of the deadly Ebola outbreak left the country and have yet to return.

A week ago Sirleaf gave cabinet ministers out of the country one week to return home or they would be considered dismissed, except for those with serious health-related excuses.

Information Minister Lewis Brown said although the list of those affected is still being compiled, it includes the Chairman of the National Investment Commission and several deputy and assistant ministers.
Critics say the exodus of government officials has added to a state of uncertainty in the country.
Brown said President Sirleaf wants all her cabinet ministers at home to join the fight against Ebola.
“You might remember that about a week and a half ago, the president issued an ultimatum that she wanted all officials of the Executive Branch back home. And so many of the officials on various assignments honored this and returned home. But a few still have not. And so with the expiring of the deadline, the president proceeded to issue dismissal orders,” he said.
Among those said to be affected by the dismissal order is Michael Wotorson, chairman of the National Investment Commission, a full cabinet position.
Local reports said Wotorson wrote to his cabinet colleagues to inform them that he was resigning his position. “This was a difficult decision for me, but it was the right one for me and my family,” he reportedly said.
Earlier this month, President Sirleaf canceled her planned trip to the United States, where she was to attend the first-ever US-Africa summit in Washington.
Local reports say Wotorson was a member of the Liberian delegation to the US-Africa summit headed then by Vice President Joseph Boakai.
A number of cabinet ministers who were also part of that delegation have since returned to Liberia.
Brown said Liberia finds itself at a time of extreme need due to the Ebola outbreak and that the duty of any democratic government is to respond to the needs of its people.
“This [Ebola] is [a] scourge that requires all of us to work together to give support to our lead agencies, including the Ministry of Health to make sure that they have all of the support that we can muster to provide them the capacity they need to be able to help the country deal with this situation,” Brown said.
Several other officials are still out of the country but not affected by the dismissal order because they are said to be attending to medical needs, while others are performing official duties.