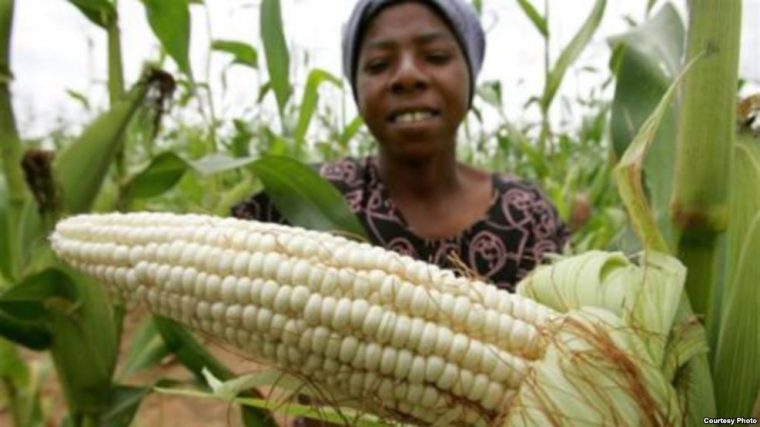 The Government-initiated Command Agriculture programme has benefited women who had the zeal to farm but were facing challenges in accessing loans from banks due to stringent requirements, a beneficiary of the programme Mrs Patience Tapomwa of Belford North Estate in Mazowe has said.

Mrs Tapomwa, a beneficiary of the land reform programme, committed 40 hectares of her land to the Command Agriculture scheme and is now applying top dressing fertiliser to her crop.

The bulk of the crop is nearing tasselling stage.

Mrs Tapomwa said most women were not economically secure and did not have the required collateral in order for them to access funding from financial institutions.

She said in some cases, assets were in the names of their spouses and could not be used by women to access funding, hence Command Agriculture becomes the ideal intervention.

Mrs Tapomwa applauded Government for not being discriminatory as everyone who wanted to participate had the chance to apply.

The programme, she said, gave women the opportunity to work for the nation, contribute towards national food security and the economy.

“Command Agriculture is a noble initiative,” she said.

“This year, most people who have been having challenges going back to the land have planted maize under the programme.

“The programme benefits women more than any other farmer as it offers working capital, which is their major challenge. With good rains that are upon us, we are confident of a bumper harvest.

“I applied early for the programme and received adequate inputs. I expect a yield of 12 tonnes and above per hectare from my crop. I did not hesitate when the programme was availed.”

Mrs Tapomwa said she planted with the first rains.

When Command Agriculture was introduced, she had already done land preparations and was a step ahead.

“Some farmers have a problem of hesitating to join programmes introduced by Government,” she said.

“They develop a wait-and-see attitude, and by the time they realise the benefits of the programme, time will have passed. Timing is important in farming.

“All the people who joined Command Agriculture will have high yields and surplus after delivering the five tonnes per hectare to Government. I am so excited about the programme. It has emancipated many women.

“Even if we are to be weaned after a few seasons, we will not have any challenges going further. We have already been given the capital — the base which we always required. We will retain our status as the bread basket of Southern Africa.”

Mrs Tapomwa encouraged other farmers, especially women to grab opportunities as they come, especially initiatives such as the Command Agriculture.

She said this was an opportunity to improve livelihoods and living conditions as one will always be guaranteed of high yields and reasonable returns.

Mrs Tapomwa expressed an interest in undertaking all Command Agriculture projects and said she was ready for the winter cropping programme.

“I will be happy to produce wheat under the programme,” she said. “This will enable us to provide food for the nation and there will not be need for us to import.

‘Instead of importing food, we will use the foreign currency to improve other important areas such as the health sector.

“Foreign currency maybe used to buy latest equipment in hospitals and this will go a long way in assisting people, especially women who suffer from reproductive health-related diseases.”

Besides the land she committed to Command Agriculture scheme, Mrs Tapomwa has another 20 hectares of maize and 20 hectares of soya beans. She is also into cattle, goats and sheep rearing.

Mrs Tapomwa is planning to buy a centre pivot to increase the hectarage under irrigation.Rank    ( + / – )

Command Agriculture is a cost recovery scheme that was introduced by Government to substitute importation of maize. This production programme targeted both A1 and A2 farmers as well as Government institutional farms, particularly those near water bodies.

Farmers were provided with seed, herbicides and fertilisers, among other inputs, and have shown immense gratitude to Government.

The programme targets to produce two million tonnes of maize under 400 00 hectares of land countrywide.

Zimbabwe requires 1,5 million tonnes of maize for both human and livestock consumption each year and the country should at any given time have at least 500 000 tonne of maize in the strategic grain reserve.