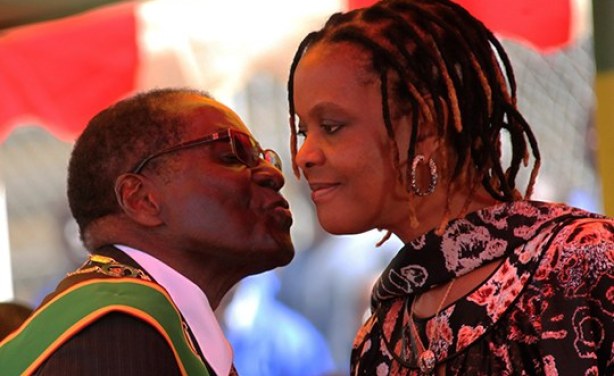 TRADITIONAL chiefs have backed Grace Mugabe’s bid for a seat on the Zanu PF politburo, joining the ongoing stampede by pro-ruling party groups not to attract suspicion by remaining silent over the divisive development.

Grace, long content to stand by her husband and look pretty sparking scornful ‘First Shopper’ headlines, made clear Tuesday that the days of just playing loyal and quiet consort to the head of state were over.

The First Lady was speaking as traditional chiefs visited her to announce they backed her political ambitions at the Mazoe compound she revealed had cost her US$7 million to develop.

The chiefs travelled to Grace’s Mazoe-based Amai Mugabe Children’s Home ahead of their annual conference in Gweru Wednesday which is expected to be opened by President Mugabe.

Grace has accepted a nomination to take over as head of Zanu PF’s women’s league and, with that, a seat on the party’s powerful politburo committee.

Her decision is thought to have flummoxed Vice-President Joice Mujuru and those backing her to succeed the 90-year-old President Robert Mugabe who refuses to indulge his reportedly impatient lieutenant by stepping down.

The chiefs meanwhile, showed no such compunction Tuesday, declaring they were joining the Zanu PF youth and women’s leagues in backing the president’s wife.

“We are here to support the recommendation that was made by others before,” said chief’s council president Fortune Charumbira.

“Our support is unanimous. Because of the good work that you are doing, you are worth rising to the level of Secretary for Women’s League.”

“It has never happened in the history of this country that one hands over such a senior position in the party to another so amicably. This normally only happens in monarchies,” he said.

“So you (Muchinguri) are a remarkable leader; you want to build the country.”

“What we are saying is this is good and it (happens) everywhere,” he said.

Charumbira also suggested there may be a group plotting to unseat Mugabe who won a new five-year term in last year’s elections.

He said: “We hear reports about someone going round claiming they want to take over … we voted for President Mugabe last year. So who do you think you are to want to remove him (from office) this year?”