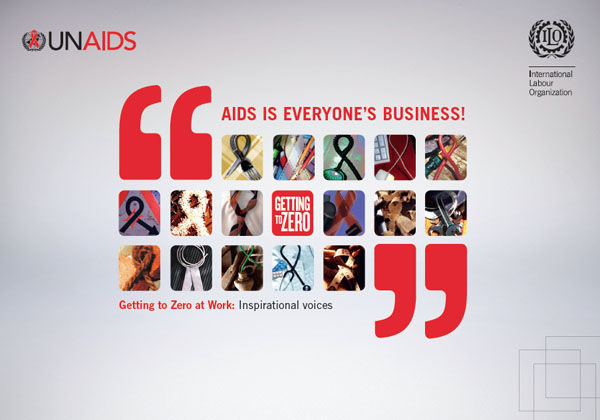 GENEVA – Prominent business leaders from Africa have committed to ending AIDS-related discrimination at work and closing the gaps on HIV voluntary, confidential counselling testing and treatment.
The commitment is captured in a new publication by the International Labour Organization (ILO) and UNAIDS entitled “AIDS is Everyone’s Business ,” which includes a collection of messages from top business leaders, including many from Africa.

The publication was presented at a side event of the Africa CEO Forum on 16 March, organized by the African Development Bank, ILO and UNAIDS.

“AIDS will be unfinished business as long as anyone who’s living with HIV is denied the right to work,” said ILO Deputy Director-General Gilbert Houngbo at the event.

“As shown by the UNAIDS Gap report , people living with HIV have an unemployment rate that is three times higher than the average national unemployment rates,” added Houngbo. “That is a serious matter that should concern us all.”

“Ending the AIDS epidemic by 2030 is possible but only if efforts are fast tracked over the next five years,” said Luiz Loures, Deputy Executive Director, UNAIDS. “Business leaders are critical partners in fast-tracking HIV testing, referral to HIV services when needed, and in ensuring zero HIV-related discrimination. The future of the AIDS response today is outside the health sector.”

“It is important to keep the issue of AIDS at the forefront and achieve zero discrimination in the workplaces,” said Solomon Asamoah, Vice President of the African Development Bank Group. He said President Donald Kabureka of their organization had already joined the ILO’s campaign and quoted his message: “HIV threatens the fragile human capital it took us so long to build in Africa. We cannot be successful without preventing HIV and promoting zero discrimination at work.”

An important part of the ILO’s Getting to Zero at work  campaign is the scale-up of voluntary and confidential counselling and testing for workers through the VTC@WORK initiative. So far, over 1.2 million workers have voluntarily taken an HIV test and more than 34,000 have been referred to HIV treatment and care services.

Vimal Shah, CEO of Bidco Oil in Kenya, highlighted the fact that the private sector has already made progress on HIV in the workplace, even though more needs to be done.

“Discrimination is down but not eliminated. We must double our commitment and efforts to Getting to Zero,” he said.