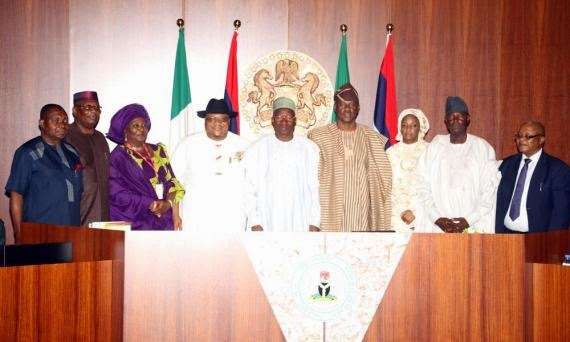 President Goodluck Jonathan, on Wednesday, swore into office eight new ministers, charging them to endeavour to make a mark in the very short period of two months left before the expiry of the current administration on May 29.

With the last appointment, the President upgraded the current Minister of State for Health, Khaliru Alhassan, to a substantive Minister of Health.

Of the eight new ministers, Obanikoro is returning to the cabinet having resigned as Minister of State for Defence in October last year to contest the Lagos State governorship primaries of the Peoples Democratic Party (PDP).

President Jonathan reminded the newest cabinet members that the timing of their appointments comes with some huge expectations from Nigerians to make significant impact within the short time available.

He likened their appointments to the introduction of substitute players in the injury time of a football game in which they have to struggle to even kick the ball once before the game ends.

“For the ministers, this is an injury time; it is like bringing a player when you have just five minutes to go in a football match.

“So, everyone wants to know what that player will do, the magic the player will perform within that short period. The player himself will be struggling to at least kick the ball before the end of the game.

“So you are coming in at a quite challenging period and I believe a number of people will not envy you because government is coming to a close.”

“But sometimes, it is even good to come at this time because you are now well exposed to Nigerians. Your dancing steps will be watched by everybody and ?we believe you will dance well,” he said.