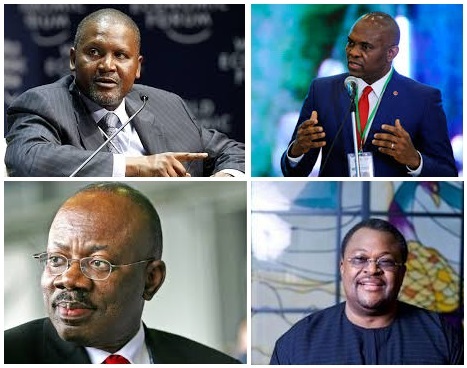 A group of Nigeria’s wealthiest businessmen on Thursday donated more than $400 million to support victims of terrorist attacks.

Earlier this week, Nigerian President Goodluck Jonathan launched the Victims Support Fund, an initiative aimed at providing relief for those who have been adversely affected by insurgency in Nigeria over the last few years. The president subsequently inaugurated a Victims Support Funds Committee and appointed Nigerian multi-millionaire oilman and former Defense minister, Theophilus Danjuma as its chairman.

According to a report by Nigeria’s Thisday newspaper, Africa’s richest man Aliko Dangote, mobile telecoms billionaire, Mike Adenuga, and Zenith Bank founder, Jim Ovia, and a few other wealthy Nigerian businessmen each donated 6.2 million to the Victims Support Fund during a fundraising dinner hosted by Nigerian president Goodluck Jonathan at the Presidential Villa in Abuja on Thursday evening. Danjuma pledged $10 million, but the largest individual donation came from banker Tony O. Elumelu, who pledged $15 million.President Jonathan donated N10 billion ($62 million) on behalf of the federal government, while other donations came in from oil companies, leading bankers, industrial groups and foreign donor agencies. The president hadreportedly planned to raise $500m for the fund over a 12-month period, but at the end of the fundraising dinner on Thursday, he had raised $490 million.

The President told the donors that the funds will be used to provide financial and material support to individuals who have lost their source of livelihood as a result of the terrorist attacks.

“For those who have been victims, they need comfort. They need succor. We cannot replace the life of a child that has been snuffed out. We cannot replace the lives of men and women who have been killed. The best we can do in this circumstance is to offer them a shoulder to lean on and to stretch out our hands of fellowship to them and tell them we feel their pains and share in their sorrow,” the President said during the dinner.

In the last five years, Boko Haram, a terrorist group, has murdered thousands and destroyed private property worth hundreds of millions of dollars. In July, President Goodluck Jonathan submitted a proposal to Nigeria’s parliament requesting to borrow as much as $1 billion from foreign institutions to aid Nigerian security forces in fighting the Islamist terrorist group Boko Haram. The lawmakers are still considering the request.