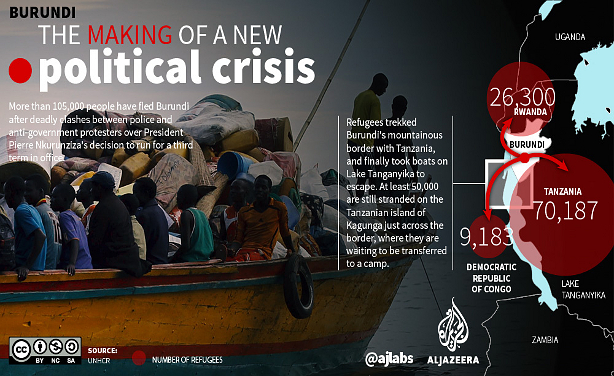 By Deogratias Niyonkuru
Burundi rarely makes international headlines or attracts the attention of global politicians – and when it does it is sadly for all the wrong reasons. This is tragically the case today. President Pierre Nkurunziza’s controversial decision to run for a third presidential term has sparked a surge of violence.

What is happening in the country, however, goes beyond politics. It is about the failure to deliver inclusive development. Widespread poverty and disenfranchisement are the key causes of Burundi’s discontent and violence.

Burundi is one of the world’s poorest nations. Infant and child mortality are among Africa’s worst. Burundi topped the 2014 Global Hunger Index for the third year in a row with UNICEF finding that 58 percent of children under five suffer from chronic malnutrition. Its human development index is also one of the poorest (180/184 countries in 2014).

Burundi is not the only country left out of the “Africa Rising” narrative as many African countries will fail to meet the Millennium Development Goals (MDGs).

While the MDGs have galvanised the international community and encouraged investment in social areas, they have too often failed to build grassroots capacity and foster economic opportunities for local people.

It was this failure to involve local communities in the development process which led us to create ADISCO in 2006. ADISCO works to mobilise communities and puts people at the heart of developmental projects.

We encourage Burundians to work together to implement local initiatives that foster economic and social development for their community and strengthen their financial autonomy. In a country where nearly 50 percent of its budget stems from foreign aid, we want to highlight what local resources can achieve.

Our approach is simple, easy to scale up, and soundly rooted in African culture and local traditions. Thanks to our important network of more than 600 local coordinators, we help local communities overcome challenges and deliver impressive results in health, agriculture, civil society, and entrepreneurship. Our spectacular expansion illustrates the relevance and adaptability of our model to realities on the ground – more than 200,000 people have been involved in activities supported by ADISCO.

Among these realities is that agriculture employs more than 90 percent of Burundi’s population. Rather than imposing top-down models or simply handing over money or animals, like some international organisations do, we encourage local farmers to mobilise their own resources and come up with their own solutions for a sustainable future.

ADISCO trains farmers to help them set up agricultural cooperatives that reinforce their position in the value chain. We have helped set up and support over 2,000 community groups and 26 cooperatives to represent their interests. More than 110,000 people can also easily access healthcare services through mutual health organisations.

We have been heartened that our work was recognised by the King Baudouin Foundation through their African Development Prize. Bottom-up local initiatives which are easy to fund and deliver impressive, sustainable results are key to successful development. We need to see them put at the heart of the international policy agenda, and specifically highlighted during the Third International Conference on Financing for Development in Addis Ababa in July.

ADISCO was founded at the outset of the country’s reconstruction efforts following a civil war. Sadly, the country finds itself again on the brink of conflict. The immediate priority is to work together to end the violence.

But once this is achieved, we have to recognise that lack of development is the key driver of frustration, anger and violence and that the best way to overcome these challenges is to encourage communities to create and deliver their own solutions. We owe it to future generations of Burundians to avoid this cycle of violence.

Deogratias Niyonkuru is the co-founder of ADISCO, the winner of the 2014-2015 King Baudouin African Development Prize.

The views expressed in this article are the author’s own and do not necessarily reflect Al Jazeera’s editorial policy.