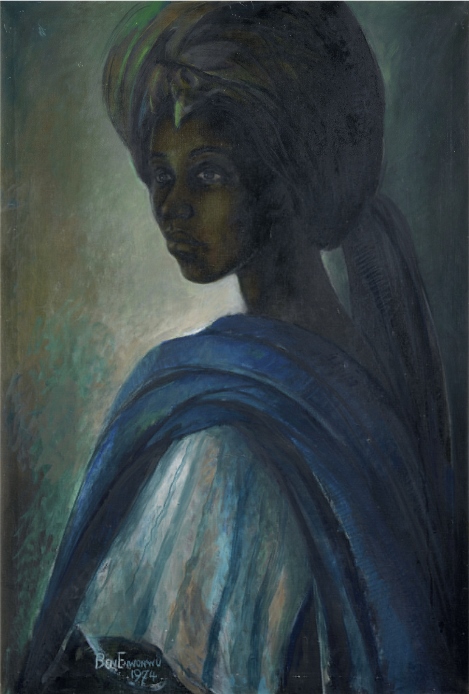 The portrait of a Nigerian princess which was lost for more than 40 years has been found in a London flat. The painting will be sold at an auction to be screened live in Lagos, allowing Nigerian art lovers the opportunity to bring back this priced treasure.

Painted in 1974 by Nigeria’s best-known modern artist Ben Enwonwu, the whereabouts of the painting “Tutu” was unknown after it appeared in an art show the following year and only now resurfacing in north London.

“The fact that she’s been lost for all these years and finally discovered is, is truly an amazing thing,” said Eliza Sawyer, specialist of African art at London’s Bonhams auction house where the painting is on display.

She said ‘‘painted just after the end of the Nigerian Biafran conflict, she does symbol this moment of reconciliation and hope for the nation. I think the fact that she is also the most famous portrait by the nation’s most famous artist is also incredibly significant’‘.

The portrait of Adetutu Ademiluyi, who was a grand-daughter of a revered traditional ruler from the Yoruba ethnic group, holds special significance in Nigeria as a symbol of national reconciliation after the 1967-1970 Biafran War.

Enwonwu painted three versions of the portrait. The other two remain lost, although prints first made in the 1970s have been in circulation ever since Enwonwu died in 1994.

Nigerian author Ben Okri said the find was on the same scale as an “important archaeological discovery,” and that the painting was the Mona Lisa of African art.

“We have to talk about the cultural significance in Africa and I go further than that as to say its cultural significance for the art of our times. And I think one would have to locate first of all in the fact of its own legend. I think people have begun to think of Tutu as being, kind of…I hate to use comparisons like that because they’re evidently unsatisfactory. But it has begun to be thought of as kind of like the Mona Lisa of African art”, Ben said.

The work will be sold on February 28 in an auction at Bonhams in London that will be shown live at the Wheatbaker, a boutique hotel popular with artists in Ikoyi, Lagos.