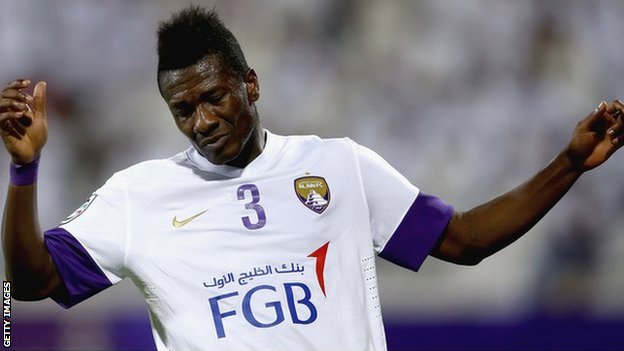 The 29-year-old, who previously spent four years with Al Ain in the United Arab Emirates, insists he wants to make his mark on Chinese football.

“I don’t understand the criticism, I work hard for what I earn. I am focused on my job, “he told BBC Sport.

“They play good football (in China). I will have to adapt to their style and take it from there.”

“I have always said that the most important thing is that I score goals.”

Gyan’s comments come after some people in Ghana have voiced their opinion that the striker has shunned more established leagues and stronger sporting competition for the chance to make a fortune.

“It is not as if I am doing anything illegal or robbing people of their money,” he countered. “I have learnt to turn the negatives into positives and so I make my decisions and understand that everyone works for money.

“At the end of my career, people will not criticise me anymore. They will move on to the next person. And at the end of my career the most important thing will be how well I did for myself, my family and those closest to me. This time is my era so I have to make sure I make the most of it.”

Gyan also dismissed speculation he may lose his sharpness in a league that some people believe will not test him enough.

“I heard those concerns when I was going to Al Ain but I continued to score important goals for the Black Stars,” he said. “I have always said that the most important thing is that I score goals. That is what the fans in Ghana and everywhere I play want. And I have scored goals consistently.”

Ghana’s record goalscorer also outlined his desire to help his new Chinese side win titles and there is evidence from his spell in the UAE that he is capable of doing that. In four years at Al Ain he scored 95 times in 83 appearances and won three domestic titles in the process.

His new boss, the former England manager Sven-Goran Eriksson, believes that Gyan’s form in the UAE is proof of his quality.

“From the club he played in Emirates he scored more goals than the games he played so we are all very happy to have him,” said Eriksson.

And on Thursday, Gyan made a flying start to his career with Shanghai by coming off the bench to score the winner against Tianjin Tada. The 2-1 victory lifted Shanghai to the top of the table.