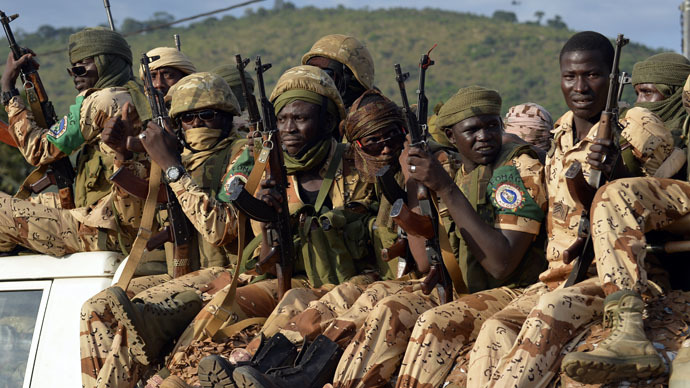 Chad and Niger have launched a major offensive against militant group Boko Haram in neighboring Nigeria. The fresh assault comes a day after the Islamists pledged allegiance to “Islamic State.”

“We can confirm that Chadian and Nigerien forces launched an offensive this morning from Niger. The offensive is underway,” Chad army spokesman Col. Azem Bermandoa said.

Chad had previously sent troops deep into northeastern Nigeria as part of a mission to retake territory captured by the Sunni militants during their six-year insurgency in the region. Sunday’s offensive, however, marks the first serious incursion into Nigeria by troops from Niger, which have thus far has only engaged in battles with the militants in the border area.

According to a Niger military source cited by Reuters, troops began strikes against the jihadis in Nigeria’s Borno state, a Boko Haram stronghold, after entering the country via the southeastern region of Diffa.

It is not clear how many troops are involved in the offensive, but thousands of soldiers from Niger and Chad have been stationed in Diffa for more than a month. Privately owned radio station Anfani, based in Diffa, reported that a convoy of more than 200 vehicles – including tanks, trucks equipped with machine guns, ambulances and water tankers – had been seen moving towards the Nigerian border on the weekend.

Since launching military operations in 2009, the Islamists have carried out mass kidnappings, cross-border attacks and suicide bombings as part of a campaign to establish a theocracy in the region. The group’s activities have alarmed Nigeria’s neighbors, who last month agreed to deploy a multinational force of some 8,700 soldiers in the border area surrounding Lake Chad.

It’s estimated Boko Haram has killed more than 13,000 people, displaced 1.5 million, and abducted hundreds, including at least 200 schoolgirls from the Nigerian town of Chibok.

Late on Saturday, the group’s leader Abubakar Shekau pledged allegiance to “Islamic State” (IS) in an audio message. Since June 2014, IS has seized large parts of Iraq and Syria, and now rules a self-declared caliphate in the region.

“We announce our allegiance to the caliph … and will hear and obey in times of difficulty and prosperity,” the message said.