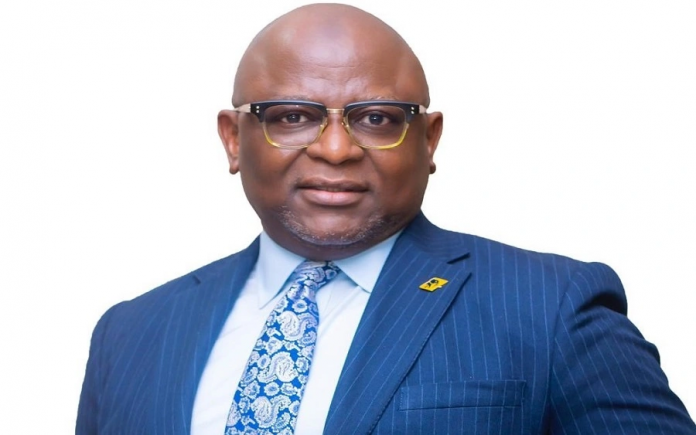 The award was presented to him by the Vice President of Liberia, H.E Jewel Taylor, at a ceremony held at the Sheraton hotels, Abuja.

The African Leadership Magazine has been following the activities of Dr Adeduntan for some years, and as he prepares to retire, the magazine is poised to ensure Africans and the world at large recognize him as the man who always put innovation at the driver’s seat.
Dr Adesola Adeduntan is our African of the week and we will like to take you through a brief history of his professional career.

In 1994 Adesola joined Afribank (Nig) Plc. and was posted to the Ibadan Main Branch of the bank as a graduate trainee. He spent 18 months in this function, working in various areas of banking operations including cash management, clearing, credit risk management, and foreign operations.

Between September 1995 and May 2002, Adesola worked with Arthur Andersen Nigeria, rising to become a manager in the firm’s financial services industry business. In this role, he led and managed the statutory audit of a number of leading Nigerian banks.

In August 2000, he served as an instructor at the Andersen World-Wide Induction training for new hires in Eindhoven, the Netherlands. He also served as the lead instructor for the Local Office Basic Accounting Training and Induction course in 1999.

While with Arthur Andersen, Adesola qualified as a chartered accountant in 2000.
Adesola was a senior manager, in the financial services industry at KPMG between June 2002 and October 2004, where he co-pioneered the firm’s financial risk management advisory services.

A knowledge manager, he was also a KPMG-accredited Trainer and facilitated several internal training programmes.

Adesola left KPMG in 2004 to study for a Master’s degree in Business Administration at the Cranfield School of Management, where he was a British Chevening Scholar. He graduated in September 2005.

Adesola was a Senior Vice-President (General Manager) and Chief Financial Officer for Citibank Nigeria Limited, responsible for the bank’s financial and product control functions, quality assurance and operational risk management. Having joined Citibank in September 2005, Adesola was to play important role in the recapitalisation of the bank during the banking consolidation era. Adesola left Citibank in October 2007.

In July 2014, Adesola was appointed an Executive Director/Group Chief Financial Officer of FirstBank, where he was responsible for the bank’s financial control, internal control and enhancement, business performance management, treasury and procurement functions.

In March 2020, Adesola was awarded the “African Banking Personality of the Year” 2019 at the eighth African Leadership Magazine Persons of the Year award dinner.