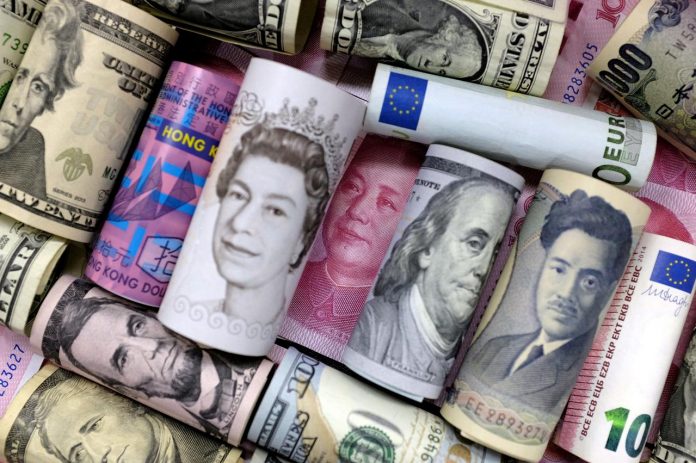 Battered emerging market currencies will eventually bounce back from their beating in the past week on worries about the U.S.-led trade war, but risks remain for currencies of commodity exporters inextricably linked to China.

For the first time in more than a decade, China on Monday let its currency break through 7 per dollar, a key support level, in a sign Beijing might be willing to tolerate even more weakness in retaliation for tariff threats from Washington.

This sent shock waves through risky currencies such as South Africa’s rand and Brazil’s real, which has lost over 3% since Thursday. But foreign exchange strategists polled this week are optimistic that by this time next year, most will have recouped those losses.

“Our top-down EMFX forecast now suggests currencies will first weaken in three months’ time, then appreciate modestly in 12 months,” noted Dirk Willer, head of emerging market strategy at Citi. “The Fed and the global growth story, along with U.S.-China trade tensions are likely to remain drivers in the near term.”

Still, recent performance just magnifies what has been a lacklustre year so far for emerging market currencies. The Reuters poll last month suggested these currencies had probably seen the best of a lukewarm year against the dollar as U.S. President Donald Trump was then expected to back-pedal on his conciliatory tone from the recent G20 summit.

Emerging market currencies have under-performed more broadly in the past couple of years as rampant Chinese demand for raw materials waned and stimulus from asset purchases trickled off, first by the Federal Reserve and then the European Central Bank.

Trump’s surprise move on Thursday to impose new tariffs on Chinese imports may eventually force the Fed to cut rates more than it had hoped was necessary, keeping rate differentials attractive to emerging markets.

“We think countries with high interest rates are likely to find it easier to attract capital flows due to the hunt for yield,” Renaissance Capital wrote in a note to clients.

Local problems in some countries have become more pronounced too, exposing deep structural problems irrespective of the global backdrop. In South Africa, President Cyril Ramaphosa is faced with serious fiscal troubles, while in Brazil, growth is expected to slow in 2020 despite pension reforms.

Though forecasters expect the rand to recover its recent losses, it remains a currency easily beaten down in times of heightened risk aversion, despite the fact its gold mining companies often benefit in times like this.

Gold is at a six-year peak as investors continue to pile into safe havens to hedge against heightened U.S.-China trade tensions.

However, like most emerging market central banks, Russia is likely to lower interest rates this year faster than previously thought as economic growth is on track to undershoot official forecasts.

The beaten-down Turkish lira will struggle over the next 12 months, the Reuters poll suggests.

The year ahead outlook for the yuan, which was taken just as the re-escalation in trade tensions between the U.S. and China took place, still showed it could rise as much as 11% in the next 12 months.

But after the recent political developments, currency strategists said it was difficult to get an idea about where the currency was headed and so forecast revisions are likely soon.

Rafiq Raji, chief economist at Macroafricaintel in Lagos, said it is plausible the Chinese authorities may now just want to wait and see if Trump wins a second term in 2020. “For investors, I wouldn’t advise such fatalism.” he added.